It’s those random nights, that lead to the best times…

I’m sure by now you realize the Bestest and I are a hoot, right?! Haha, we aren’t really that conceited, I promise! But when we get together it is usually a two woman show and we end up being so in our own world, we don’t realize how loud and obnoxious we can get! Add a little food and a lot of libations and you have one GREAT Thursday night.

The Boy joined in the festivities after awhile, but he didn’t stand a chance. So I thought I’d dedicate this WIAW to giving you a glimpse of what an evening with us two would be like! During our all-day g-chat sessions we decided Thursday night we’d get into some shenanigans! We have a running list of places we want to try (new and old), so we thought we’d knock one off the list.

As we were walking to Block Butcher Bar, we stumbled upon Ficklin Wilcox. This little street on the Grid is fairly untraveled. With so many other things just a half block away, this little spot gets missed, quite often I can assume. However, this little wine shop has plenty of history in our town. Apparently this is “America’s oldest PorT winery.” When Jason, the only worker in there said this, I literally thought he said “PORK”! I looked around and said, “pork?” The both looked at me like I was crazy and then slowly Jason said, “pooooorttttt!” Cool blond moment! They have tons of snobby wine trinkets, home goods, and PORTS! We were the only two in here and tried to recruit three gentlemen in, but they had BBQ on the mind! They said they’d be back, we were working on our grassroots marketing for FW!

After we got a good ‘ol sugary buzz on, we sauntered over to Block Butcher Bar ! I’ve been ogling many a IG accounts with posts of charcuterie, cheese, and libations. When you walk in it is like a mini-butcher shop. Meats and cheeses prominently displayed in a mini sized butcher case. Little sweets and random adornments near the register. If you walk in a little further there is a bar with seating and regular restaurant seating. This place by no means large in size. But they are killing the charcuterie game…and the libation game as well 🙂

Luckily the Boy showed up when he did. We almost killed all the goodness, but he was able to get a few tastes in. We don’t play when it comes to food. We basically workout to EAT! After finishing up, we decided we’d go the The Rind because neither of them had been there yet and we all wanted one more beverage!

The Rind is another Grid fave of mine. It basically focuses on all things cheese, wine, and some beer. They don’t skimp on the beer selections, but I don’t drink it so I don’t really pay attention. They have everything a cheese addict could want – cheese boards, grilled cheeses, and mac-n-cheeses!

Who wouldn’t want mac-n-cheese for dessert? If you answered “no”, then maybe we can’t be friends 😉 After a lengthy process of elimination, we all settled on a glass of wine. Luckily the staff here is awesome and will let you taste to your hearts content, they truly want to find you a glass that you will enjoy. We also thought it wise to try a dish, since both of these fools were newbies here. After much debate between the Bestest and I (the Boy had no say) we went with the seasonal Apple Walnut Mac-n-Cheese! Yup, apples in our mac-n-cheese. Sounds kinda sketchy, but it was tasty…I’m glad we tried it! 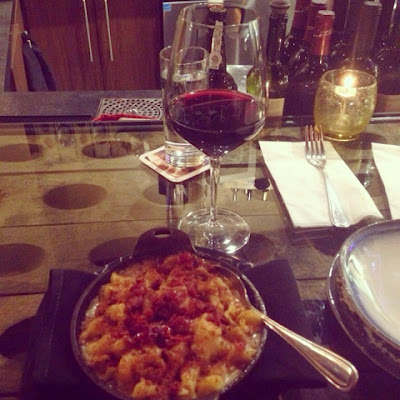 I couldn’t have asked for a better Thursday evening. It’s moments like these that remind me to be grateful for the amazing people I have in my life! Also, to be grateful that can try new foods and experience life one plate (or drink) at a time! I’d gamble my surprise lactose intolerance for these two, any day!

Charcuterie is my new favorite word, even if I can’t spell or say it properly…

The Phone Call That Changed Everything…