Rose: The  Gmen winning NLDS game 2 in 18 (loooooong) innings.
Thorn: Leaving my keys in J’s car so I couldn’t run errands and get a pedi!

Oh hey October, it’s cool, we still want to enjoy 90+ degree weather. I guess you forgot it is Fall! A lovely, but very busy weekend. So busy and active, that by Sunday afternoon all I could muster was lounging around and watching everything on my DVR.

My Gmen and my Niners had a winning weekend, so I really have nothing to complain about!

FRIDAY
Guess what this weekend was? Race weekend! It’s been awhile since I’ve said that 🙂 After work J and his Little Lady met up with me and we walked over to our local Fleet Feet for our race packets. Packets in hand, we walked back home to grab a car and head to dinner. Since 2 nights prior to race day is most important for carb intake, we went to my fave local carb spot – Pronto. Carbs and playoff baseball, couldn’t beat that! We didn’t do too much since Saturday was going to start early for us…

…but I did convince J to watch his first ever Gilmore Girls episode…AND it was on Netflix. I’m a happy girl, now that Netflix added GG’s, their best decision EVER! 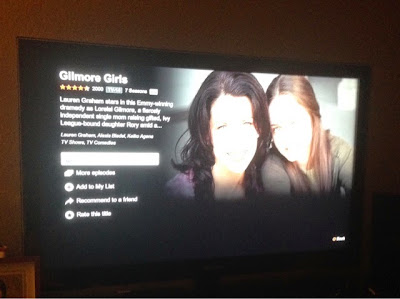 One of my most favorite Saturday Midtown classes ever. It was literally just J, Little Lady, and I…well and Bobby of course. Class started a little late, but we didn’t mind, we went light for the workout, because we had a race the next day. Don’t get it twisted, it was still a sweaty workout, it was just a little easier than normal. Also, with tons of stretching and foam rolling at the end. Little Lady had a blast working out for her first time. She found the smallest kettle bell and went to town, before we even started our workout. She even wanted to learn how to do a burpee, she’s crazy! She did a modified workout along side J and I. We all had a great time and LL already asked when she could come back again.

Right after class we headed home to walk to a nearby park to go volunteer. Earlier in the week City Scout posted a great volunteer opportunity. I’ve been wanting to do something on the Grid and this was perfect. All you had to do was show up between 9AM-11AM and pick up trash, which is what we literally did. They were kind enough to provide Noah’s bagels, Peet’s coffee, and water for the volunteers. It was a fairly simple process, you were handed a trash bag, gloves, and you could grab a branded trash picker-uper to use. They sent us out in a general direction and then we were on our own. The three of us walked around for a good 45 minutes, mostly picking up cigarette butts, more than anything. There is a method to trash picking up, go near business fronts not in the neighborhoods. You will be more fruitful where there is more foot traffic. I guess this is pretty common knowledge, but in case you were wondering…that’s my volunteering 101 tip! 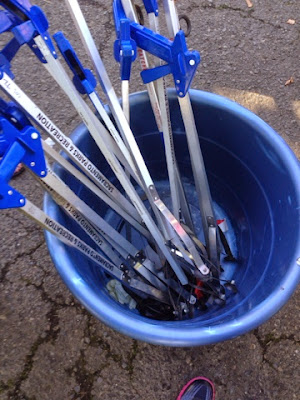 After we did our volunteer thang, I was craving a “good” coffee. So we walked to one of my fave, local coffee shops to satisfy my caffeine addiction. Mocha’s always make me happy! A walk sounded good, until we realized it was a mile round trip and it was getting really warm :/

After a quick shower and hanging out for a bit we headed to J’s nephew’s soccer game. We grabbed a quick lunch to eat, before so we could enjoy it while we watched some footy. I melted, literally. Who knew it was going to be in the 90’s in the first weekend of October? We watched the game and then jetted out of there so I could get home to watch Game 2 of the NLDS.

Little did we know this would take 6 hours and 23 minutes of my Saturday! J and LL were patient with me, but at some point I had to send them off to a friends house to got meet baby Isabella. I stayed behind, but skirted over there after the Giants at bat in (around) the 13th inning. But not before I had decided against normal pre-race activities (this may or may not be a lie), to have one small glass of wine while I was watching the game. Thankfully, they had the game on for me when I came rushing through the door. I hung out with everyone, but was really rudely just focusing on the game. I did congratulate the new parents and snuck a few peeks at baby Isabella, she is adorable/precious/beautiful and so tiny! It was getting late, in baby time, so we all left and I skirted back to J’s casa to finish watching the game. 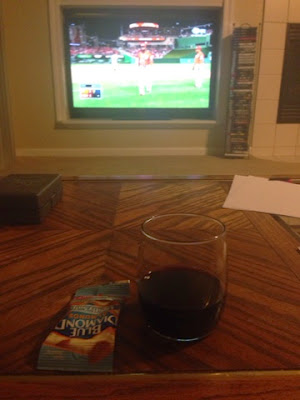 That game literally sucked the life out of me. You really need stamina to be a Giants fan. My stomach was in knots and I was crazy tense. All in all, they came out with a WIN. Since the game started so early, 2:30PM, it was only 9PM when the game ended, so I could still get plenty of rest for the race.


SUNDAY
Race day! Don’t want to ruin the re-cap, so I’ll leave you in suspense…until tomorrow! I didn’t know what the race would bring, but I just wanted to give it a good effort and enjoy the race, which I did. 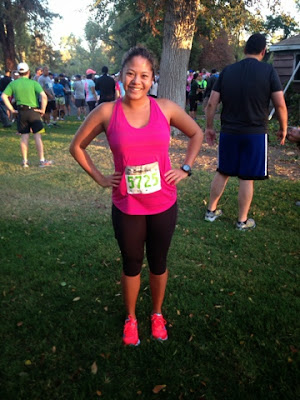 After the race, we had to drop Little Lady off at J’s grandparents for a bit. So we went to one of his childhood favorite resturants…which happens to be a friends family restaurant too! For some strange reason, Pepsi always sounds soooo good after a race. Our brunch was tasty, but it was quick because I had a birthday party and J had a soccer game.

I had grand plans of a shower, quick nap, pedicure, and a trip to the mall. But NONE of that happened 🙁 I accidentally left my keys in J’s car and had to wait for him to drop them off to me after his game. So I rested for a little longer, watched the Niners, and then took my time getting ready for the big celebration.

An afternoon with all the women in my family is was exactly what I needed. We were celebrating my cousin’s 50th birthday party. She could be considered more of a big sister than a cousin or an aunt. I used to be very close to her and her husband, over the last few years I haven’t been as good about dropping by and going to their son’s sports activities. As I write this, I feel a little sad. Regardless, whenever I see her I can talk to her about anything and she is guaranteed to make me laugh with her craziness. 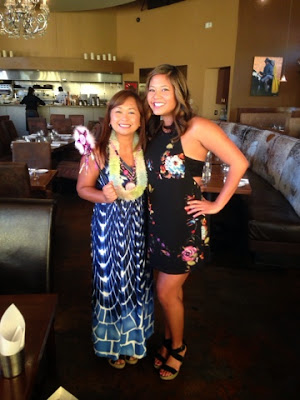 My aunt held a lovely lunch for her at a local restaurant, Roxy Restaurant and Bar. Ladies only this time, poor guys in our family! It’s a great feeling to be surrounded by some amazingly strong women, who have helped shape our family with their strong family values, work ethic, and unconditional love. Some people don’t appreciate their family, but if you spend any time with us, you’ll know we love to be around each other. Even if we are mocking each other or teasing one another, it’s all signs of love! Oh and these women can EAT, we don’t play when it comes to food 🙂

After the party, I headed home. I had some grand ideas of running errands and getting stuff done, but it was just too damn HOT! I went home and ended up just lounging around the rest of the evening. The one thing I did accomplish was to clear my DRV! I watched all of the new Fall shows that have been stockpiling in my DVR and I feel damn proud of that! I even watched a brand new show NCIS: New Orleans…I still haven’t decided if I’m into that one or not, but it reminds me of a good friend who lives there!

J and I did get some good, fattening food for dinner. To-go of course, the comfort of laziness and TV watching was too alluring, versus going out somewhere and getting ready! It was definitely a glutenous day for me and my diet. By diet, I just mean the food that went into my mouth.

Another great weekend, my heart is full…