My body is still screaming from this weekend…

Friday
I came home to the BEST piece of mail ever. I don’t think I mentioned it in earlier posts, but I wore a fun faux fur vest, from Tarjay. I pretty much took it off once I walked in the door and left it on a chair. As I was upstairs hanging out, my cousin found it and THEN my entire family decided to try it on and take pics with it. Then I came down and we all had a good laugh and J and I even posed for pictures in it! However, my crafty aunt decided that it needed to be memorialized and sent out to the family. Thus came this…. 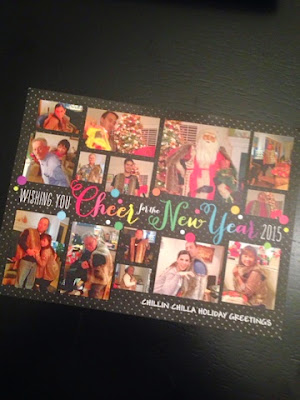 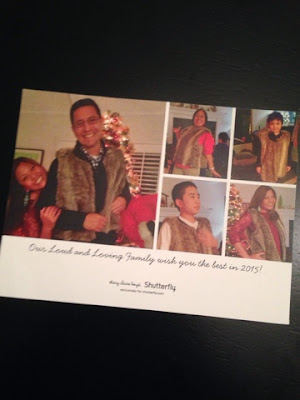 I think it’s starting to turn into a little tradition, but every other Friday we pick L up in Folsom. So instead of sitting in traffic, headed back to the Grid, we take advantage of what Folsom has to offer, it’s also more than likely we have a few errands that could be ran. So after we swooped L, we went to Target and Sports Authority. Then we had our family date night at Macaroni Grill. I love this place, but rarely go. I was craving pasta, so we indulged. The staff was awesome, our food was great, and we got to draw on the table. Most interesting thing about the trip, if you select the house wine they proceed to draw a wine glass, put one hash tag in the wine class pic, then leave the large bottle at your table. From there on, it’s the honor system, so you add hashes as you drink. Interesting…right? 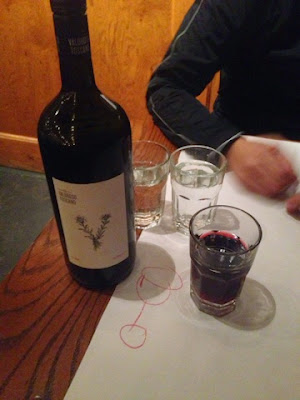 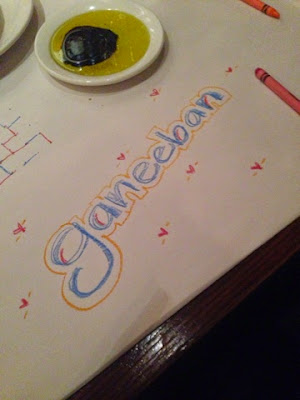 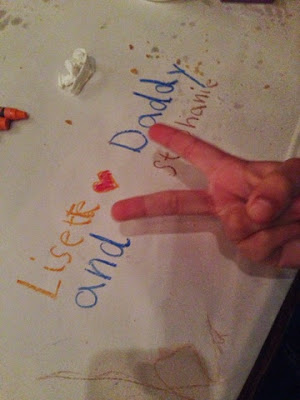 After dinner we were craving something sweet. However, we posed this question to L: get ice cream or play with the iPhone all the way home? She didn’t pick what we thought she would, she picked the iPhone. Not gonna lie, I still wanted ice cream. Is it rude to let her sit with her consequence while we get ice cream? Anywho, we were lenient and told her we wanted ice cream and she could give up the phone now and eat some with us or keep playing and not have any. I think that was a good compromise, but am still wondering if that was the right choice. Choices, decisions, and consequences are something we all have to deal with…right?!? 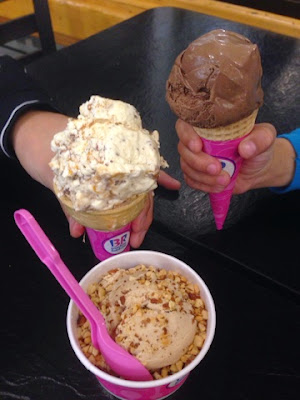 Saturday
16 miles on the training schedule. Since it was a long training run, I reached out to Steph (who will be running Napa with me) to see if she wanted to run together. We had a 9AM running date. However, because J was helping his aunt, I was a little late to our date. I also left in such a hurry I forgot my Garmin, energy chews, and my salt pills. Let’s just say, I wasn’t starting this run off in the best of moods. 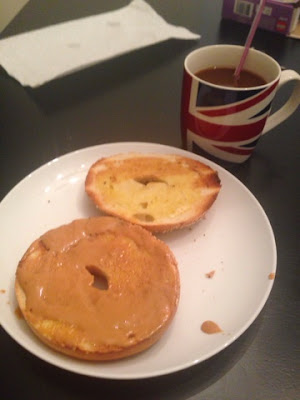 For the first 7 miles I was holding strong with Steph, but after that I faded. I told her to run on and that I’d just go my pace. I hate being the one to hold someone back. She kept going and I fell apart. A few things happened, I was becoming increasingly dehydrated because I had planned on relying on the water fountains after my hand held water bottle was finished. Sadly, this didn’t work out and from mile 9-13 all I found were non-working water fountains, finally at the last one a biker kindly let me have some of his water, as we chatted about the water fountain situation. I was annoyed, my body hurt, and I was tired. From here on, I ran/walked the last mile. This was my first long run in two weeks and the last one was hellish too. 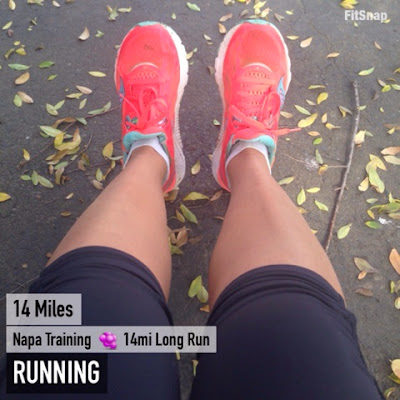 So, needless to say, although I had a strong 7 miles, I came to the conclusion I cannot compare this marathon training cycle to my previous one. I am not as conditioned as I was before and my pace is not where I expect it to be. I need to accept this and run the pace that my body is allowing. If I can push it, I will, but I can’t expect my body to perform a certain way if it isn’t ready too. That’s a hard thing to swallow. I know I can do better, but my body isn’t there yet. Also, I won’t cut myself any slack for being sick for so long and trying to make my comeback. I just keep getting frustrated on the course. My head says get over it, but I still keep getting down on myself. I put most of this on social media, thankfully everyone was supportive and reminded me of this. Put the bad run behind you and move forward! Done!

After I was home and showered, we headed to good ‘ol Costco to get my tires looked at. Before I dropped BB off, before I asked to have my tires rotated, and before I received their call when I was home – I knew. I knew I needed a new set. BB got a new set of shoes this weekend and I can still smell them every time I’m in the garage. BB has been through it all and is still truckin’, but come June or later, I’m hoping to introduce a new addition to the family to you! I love you BB, but our journey is coming to an end soon 🙂

While J went to go get his run in, I invited Mad, Little Mad, and Lili girl over to join us at the park. They came over and we all walked the quarter of a mile, or so, to the park and played for about an hour. It was getting dark and we were waiting for the call regarding BB. But it was really nice to let L and Little Mad burn some energy off at the park and with a nice little walk! It was only fitting that all three of us got some exercise in for the weekend! After we got home, the Parentals came over and actually brought BB to me. They spoil me, for real! They hung out for a bit, but left to go do their own thing! Then I ran to the store to grab some stuff for dinner and the weekend. Once back, we worked on dinner. J and L were also setting up her new Lalaloopsy Easy Bake Over for our lovely dessert.

Since we are still figuring out our weekend eating habits with L, especially me, meals are kinda tricky. I am trying to figure out what she likes to eat and doesn’t like to eat, while also encouraging her to always try at least one bite of our food. She has done a great job and has even liked some of the things she would immediately say ‘no’ too! So, we had Orange Chicken (TJ’s) and white rice planned, but I went out and grabbed an order of Chicken Chow Mein (to-go from Ma Jong’s) just in case she didn’t like it or it was too spicy. In the end, everything was enjoyed by all, minus the shrimp in the chow mein by J! HAHA, oops! Dinner was a success, but our first batch of dessert wasn’t so great. But the second set of cookies to come out worked out much better! 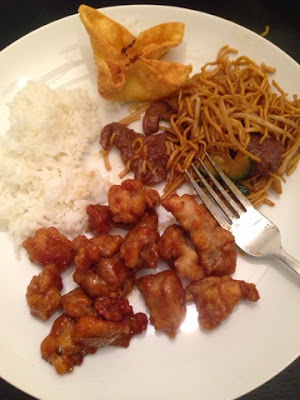 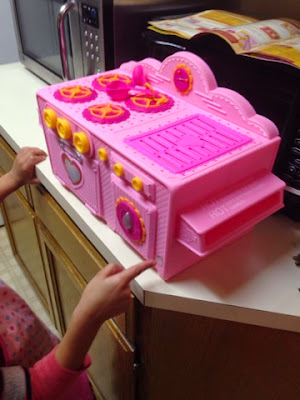 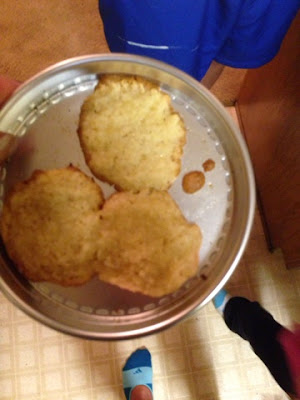 After dinner, we didn’t do much again. L watched Lion King for the first time, with J and I read my book. I was extremely sore from my run so I was completely content reading and going to bed early again!

Sunday
Up early, because training runs have to fit in somewhere. This was a 6miler that went okay. I tried to take my emphasis off my watch and run how my body felt. However, my body only felt like running one mile under a 10min/mi pace, which annoys me, but I’m trying to deal with it. After six miles, I headed home and rolled out and stretched for as much as I could stand. 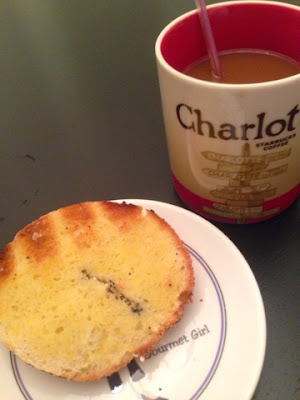 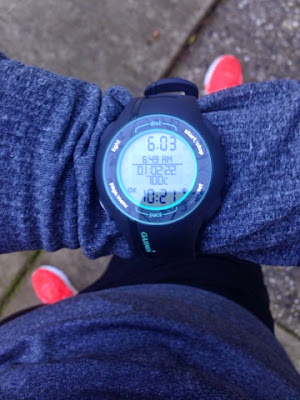 I had to shower and get ready to work a shift, demoing Vega, at Whole Foods. I think I’ve mentioned this part time job on the blog before. If not, Vega is a vegan product that I’ve used before the idea of me working for them was even a thought. I’ve used it for a couple of years for marathon training and also while lifting. I was looking for a protein, other than whey, but didn’t care if it was vegan or not. I tried a single packet that they sell at the co-op and I haven’t looked back since. Anywho, I had a four hour shift slangin’ that goodness, while being tempted with all the good things that Whole Foods offers!

After my shift I grabbed a small bite from the buffet section and a Vegan Maple Donut for my drive over to T-monies house. We planned our annual girls holiday outing a little late this year, but we weren’t going to miss it. Over the years the group has changed, but there are two that remain constant – the Bestest and T-monies. We used to keep it real classy, but slowly we’ve been scaling back a bit. This year was mani/pedi’s and a early dinner. And it was perfect.

The nail salon was not crowded when we arrived, but continued to get so while we were there. I decided to get rid of my gel nails and just get a manicure. My pedicure was still too fresh to get a new one, but someone massaging my legs would have been perfect! After a little pampering we headed to a fave spot of T-monies. They do Mexican, but they also offer Vegan options, of which T-monies is! So, it was a win-win, meat for me and vegan for her! 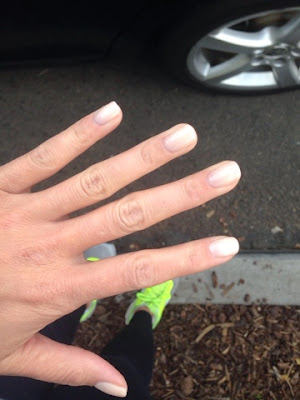 The meal was okay. It wasn’t my favorite, but I’d go back and try it again. For some reason they decided to mix up their Spanish Rice recipe and made it crazy spicy, needless to say I was dying! But their fresh salsa bar and chips were delish! Their guac was salty and not tasty, but their larger-than-life Sangria was tasty! 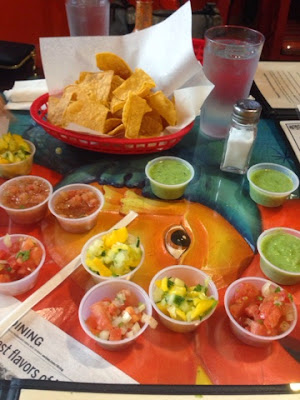 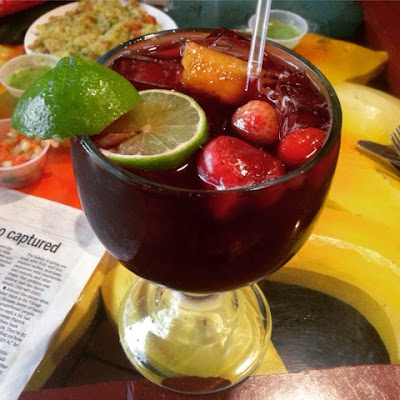 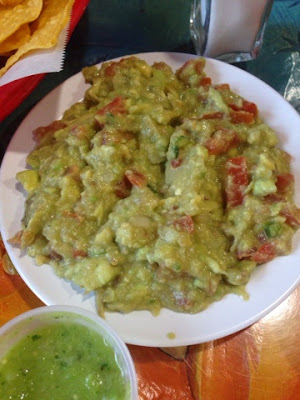 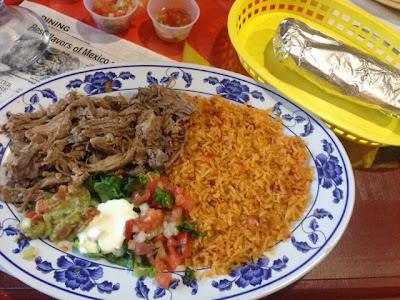 I was exhausted. My body hurt from 20 miles of running for the weekend and 4 hours of standing at WF’s, but I was glad to finally be home. I had plans to do nothing, all of which I did. I did read a little, caught up on some of the DVR, and hung out with J. At 8PM I was ready for bed, but felt like I’d wake up at 2AM, so I forced myself to stay up a little later, before falling asleep. Without being too busy, it still felt like a long weekend…