Just living the life of a faux runner…

Rose: Hosting a dinner for two gals who were running their first half marathon!
Thorn: Lingering aches and pains and attempting to play soccer after a Halfer!

My body is screaming from the inside. My forearms are sore, my left knee has the weirdest pain ever, and my right ankle is somewhat walkable. All those complaints aside, I truly enjoyed my weekend.

Friday
Who knows what made J and I start wanting to run two days before our Halfer, but we did. We ran a loop we knew that would drop us off right in front of Fleet Feet for our packet pick-up. It was a really, really muggy evening. That and the bugs were out, I think both of us ate some and ended up wearing some on our clothes. Crazy sweaty, we walked about ten steps to cool off before walking into FF. You have to walk through the entire store, which was really full, to get to the back where they host the packet pick-up. 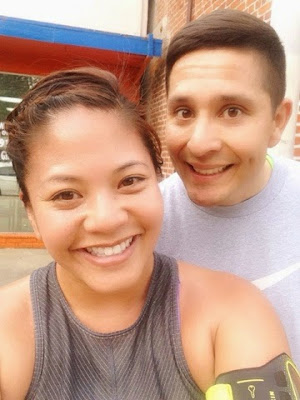 We swooped our gear, drank some Nuun cause we were thirstaaaay! We walked the last part home and ran across some interesting sights – a box of free books and a fake snake. Since my Garmin died I tried using my Nike Plus app, but the girls were texting like crazy and it interrupted my Nike app. So needless to say, I’m assuming it was a little over 3 miles for the evening. 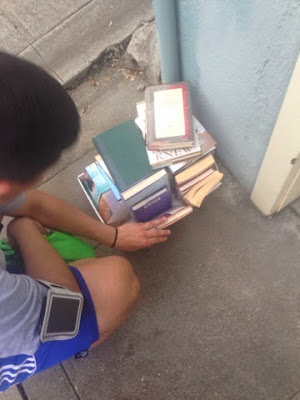 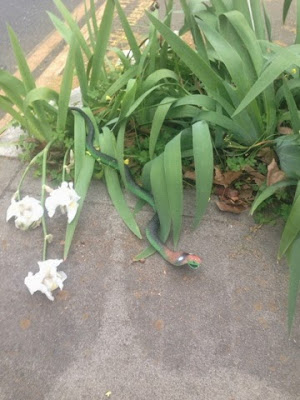 We changed out of our sweaty clothes and headed to Target. I didn’t need anything per se, but I hadn’t been in at least two weeks and was jonsing. Really, no lie! $50 later, I had some of the most random stuff, yet some useful stuff. Then we headed to grab our go-to carb dinner at Pronto. We shared a nice dinner together at home and then relaxed for the rest of the evening. I dozed off early since I had an early start the next AM. 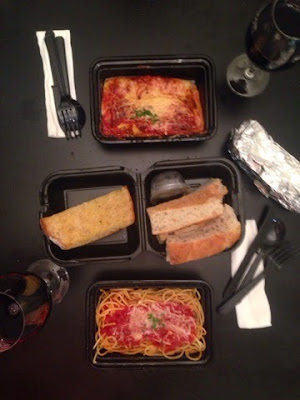 Saturday
Since I’ve been feeling particularly unhappy with my body lately, I am on a mission to get my fitness on (kinda). So I decided as my shakeout run, I’d run to my Midtown class in the AM. I decided I needed something in my stomach, so I woke up extra early and had some coffee and breakfast cookies before I left. 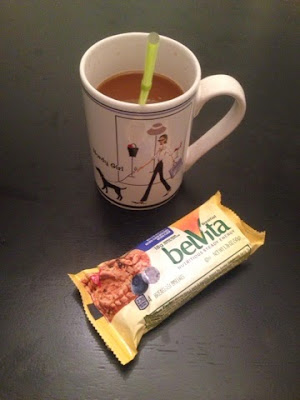 So, pretty typical of me, I thought the run was about 2 miles, but it ended up being a 5k. Also, I left the Garmin at home and really set my Nike Plus app, but I also ran with music. I couldn’t find my headphones, so I was that annoying girl who ran with her music on loud for everyone to hear. But, I justified it since it was 7AMish, no one was really going to be bothered by my Goapele. 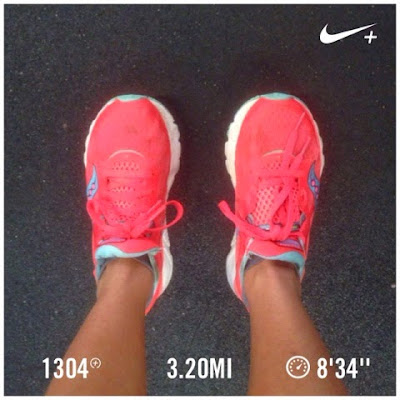 Sweaty, I finally made it to Midtown for what turned out to be an ass kicker – over 100 burpees, running, KB swings, bear crawls, and then to finish it off with planks and tire flips! No bigge, I don’t have a race the next day or anything. My decision making skills are lacking, proven once again. Since I ran there, J so kindly woke up early and picked me up after class. I was drench and desperately needed a shower and some rest.

After hanging out, eating a breakfast burrito it was time to head for our coffee date with Jen and Eric! Dutch Bros has been making a splash in the news. So, we hoped the hype had died down a bit and met them there for some coffee and smoothies. Nope, the hype was still real, but we didn’t have to wait in line too long. I tried the “Cocomo” of their regular menu, highly recommended by the Bestest, and J ordered a donut clad with fruity pebbles. Our dates ordered smoothies, coffee isn’t really their thing. We laughed at how freakin’ hot it was outside and the people watching this place offered, in addition to figuring out where we’d see them on the race course the next day. 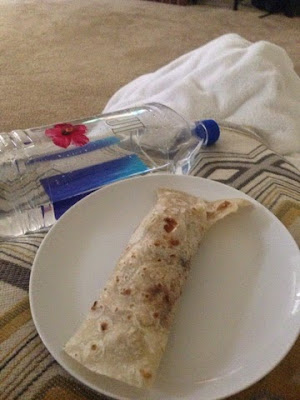 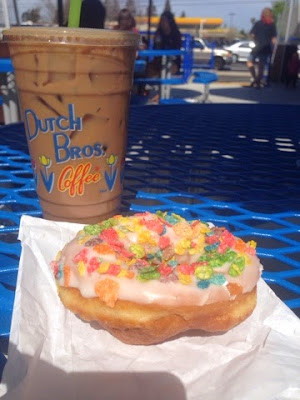 After our short double date, I headed to the salon to get my hair did. It took a little longer than I expected, but J was a trooper. He ran errands and visited his brother, while I sat in the chair and waited…and waited…and waited. Finally hair did, we headed back home. We didn’t have much time to veg out before I started dinner. 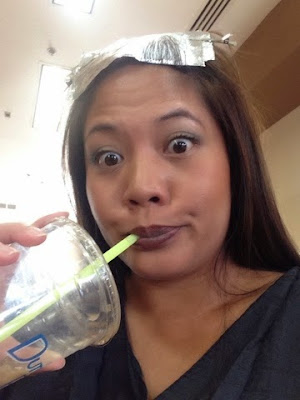 I was really excited to be hosting a dinner for two friends who were running ShamrockN for their first half marathon EVER! I was super happy for them and wanted to offer a carb dinner for them. Luckily they are awesome and they brought over garlic knots and a delicious salad to compliment our spaghetti and turkey meatballs, a la Trader Joe’s. 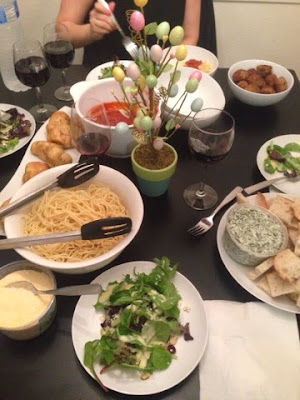 Although the girls, Lacey (old co-worker) and Fabs (played high school soccer together) had never met, they conversed easily over what their task would be the next day. We talked about strategy, fueling, their training cycle, and anything else that popped into their minds. I vaguely remember my first half marathon and I definitely didn’t have anyone to ask questions about my run. So, I was glad, although nowhere near a professional, to be there if they wanted to discuss anything. It also helped that Fabs brought her daughter, Aaliyah, she is too freakin cute and kept us entertained. J was a trooper and hung out with a house full of girls!

After the girls left we tried to get to bed super early. However, since it was Second Saturday, we heard people screaming/partying all night. I don’t think I really fell asleep until midnight, even though we went to bed around 10:15PM.

Sunday
Per the last two weeks, tomorrow I will re-cap the race. So, I won’t bore you with what happened from about 6AM-11AM.


Once home from the race we both rolled out and stretched really good. Sadly, we couldn’t connect with Jen and Eric for breakfast. After we tried to relax a bit, we grabbed our soccer gear and headed to Noah’s and Starbucks so I could re-fuel for our soccer game. 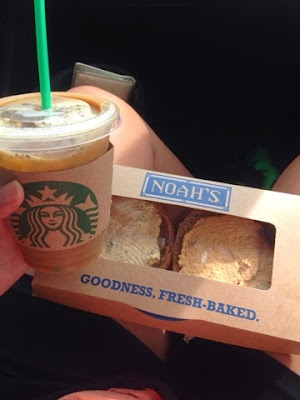 Again, no where near conditioned as last year, I probably should have sat this game out. My legs were tired, but I’d be damned if I wasn’t at least trying to make runs to balls and make coherent passes. It wasn’t really working, but after the first half I didn’t have a choice, but to play the entire half. At times I’d have some good runs, other times I’m sure I looked like I was running underwater.

After that ugly game, we headed to the Nugget (our local version of Whole Foods) for a juice and a snack. This is one of my fave post-game rituals for this league – I get to get a Nugget juice after every game! For some reason I was craving the sushi, when normally store bought sushi scares me. It was calling my name, so I gave in. J got some Indian food from the hot bar and we ate outside at one of their tables. The weather was perfect and it was nice to finally eat and relax. 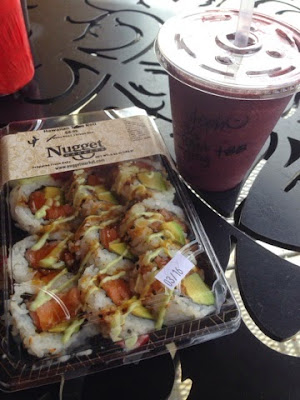 Back home, the day was pretty much a wash. We finally showered after all of our activities, gross (I know), and I took about a two hour nap. We lounged about and both of us were starving by 6PM. Since neither of us were interested in getting dressed, J ran to grab dinner for the both of us, while I opened a bottle of wine and got the DVR ready to watch when he returned. We devoured our meal while watching more of our backed up DVR for the better part of the evening. 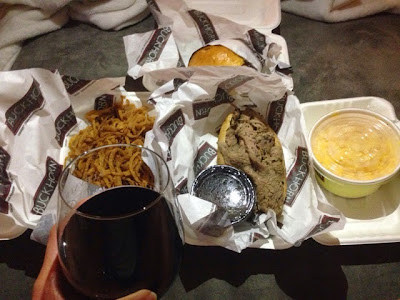 However, J was craving ice cream so we went and got some. Who am I to say no to ice cream? I invited my parents, since we had mentioned we’d go with them earlier that week. They finished up their dinner and met us. We had a quick little ice cream double date with the parentals. A perfect way to end our busy and rough weekend. At home again, we just watched more TV and fell asleep super early, like the old people we are becoming 😉 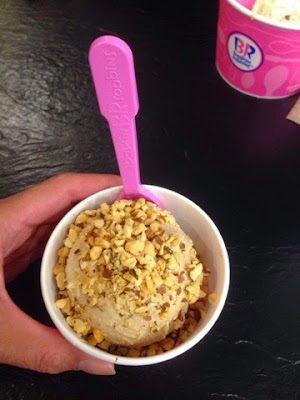 Under-trained racing is apparently my thing these days!