This gloomy weather has me like…uuuhhh…

The Merry-Go-Round WIAW Link Up! Today starts the ever rotating WIAW link-up cycle and we find ourselves at Arman’s page – The Big Man’s World. I’ve seen him on a few of the blogs I follow and know that he is largely into food (and fitness, I think). Thanks for hosting Arman!

Like I seem to say every week that I don’t have a themed WIAW post, my daily eats are pretty boring, shot through my iPhone, and are a little embarrassing. But that’s the thing about blogging, you’re suppose to keep it real, right?!? So this is about as real as my daily eats get!

Breakfast
We took out ground turkey (from the freezer) awhile ago and needed to cook it before it spoiled. So, in true Ganeeban fashion, I eat to not waste. I paired ground turkey with brown rice, topped with Trader Joe’s Soyaki. Normally I would use the Trader Joe’s Organic Ketchup, but we are currently out and keep forgetting to buy some :/

Snack
Thanks to Lil, I have a whole case of these grab and go Cheez-It packages from the slumber party. So, I seem to grab one each morning for my snack in between breaky and lunch. 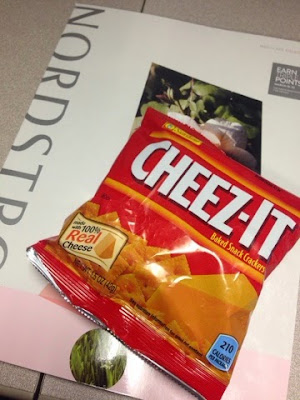 Lunch
Again, Trader Joe’s is my go to. I heated up a Chicken Patty and cut it up, then cooked up some of their (frozen) Asparagus Risotto. I’m so glad I stumbled upon their frozen risotto and tried it, it’s amazing! I didn’t snap a pic of my Tupperware, but here are the items from TJs! I highly recommend both items, great price and both have great flavor – not to mention their convenience is a huge bonus!


Dinner
After L arrived, we headed over to J’s family’s casa. His Abuela had dinner ready for us – tortillas, Spanish rice, and carne! Yum, yum, yum! Basically Taco Tuesday! We spent a few hours over there before we headed home for the night. 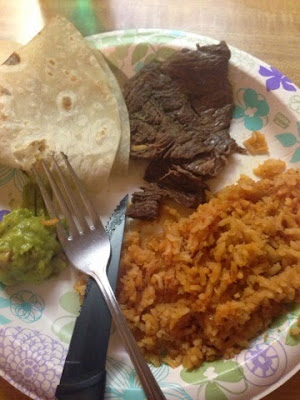 Snack
I really, really, really wanted something sweet. But since we just booked a summer cruise with the fam, I am trying to make better food decisions. So I mixed a half glass of Ocean Spay Cran-Apple Juice and water and made that work. It was no Häagen-Dazs Carmel Cone, but it did the trick.

Random Monday EATS
Since I’m a proud little Alumnus, I wanted to share an event I went to on Monday night and the goodies they shared with us. About 20 current and recently graduated students were recognizes on the Senate floor at the Capitol for academic or club achievements. So, the local Alumni held a HH for them, that same day. I think this was the first time I was invited to one of these swanky events, not just a no-host HH for alumni. So I made a point to check it out, but not without my co-worker as my date!

It was hosted in a law office on the 18th floor of the U.S. Bank Tower in Sac. They had a local restaurant, Ambrosia, cater. They were also offering bottles of beer and three varieties of Cal Poly wine. I caved and broke my Lent promise and had three glasses of the Cal Poly Chardonnay. It was tasty. The had caterers walking around with random appetizers, but they also had sando’s cut up and a cheese spread that I thought was pretty. 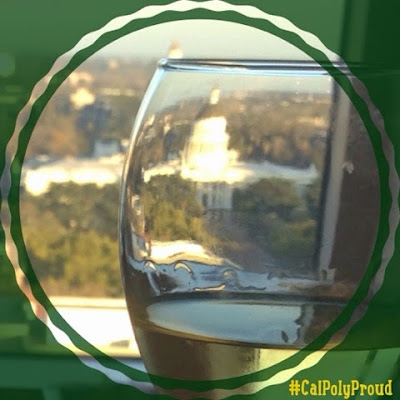 The life of a non-cook with no groceries in the casa….

Thinking Out Loud – Right to Write

Thinking (Out Loud) About Another Year!