Back in December 2014, post CIM race, the Sacramento Running Association (SRA) offered a discounted rate of $26.20 for their fifth annual Sactown 10 Miler. You see what they did there 😉  So, being overzealous and somewhat eagerly training for Napa, I signed both J and myself up for the race. However, at that time I did not take into consideration that we’d be in the middle of both of our soccer seasons.

Come to find out, on Thursday (before our Sunday race) I realized the time conflict. If we were to do the 10-mile race we’d be late to J’s game and I would be extremely sore and tired of my 11 AM game. On Friday AM I called to see if we could switch distances, which we could do, but had to do it at packet pick-up on Saturday.

This was the fifth annual race and has been a pretty popular race in Sacramento. Last year there was a huge buzz around the race and the prize money, people were coming in from various locations to race. I didn’t hear much of that this year. This was also the first year they added a 5 mile distance. They also changed the course, dramatically, from the previous year. This new course has you running more through downtown Sacramento and through the newly developed West Sacramento. You literally go in the opposite direction this year and you skip all of East Sacramento and the Sac State area. Also, it seems as if the 10miler group just did two laps of the 5-mile distance, which sounds awful to me!

Saturday and race day were the only days for packet pick-up. We stopped by our local Fleet Feet to grab our packets. Per the usual, the packet pick-up was in the back of the store. However, since this is a smaller event, it didn’t require a huge tent, just the patio, and the back room. Easily, we grabbed our bib and t-shirt, which is the softest and my new face race shirt, then headed to the registration desk to change our course distance. Easy as pie, in and out in less than 7 minutes…which is all we paid for in our parking meter!

Sunday AM our race was slated to start at 8 AM and the 10 miler at 8:25 AM. We were up at around 6:45 AM to start our pre-race ritual – breakfast, poop, dress, race! However, we were a little slow at the whole ‘get ready’ part and left the door really late. Parking was pretty full, so we changed it in a ‘passenger loading’ section. I wasn’t worried, but J was 😉

We walked up as the National Anthem was being sung by a lovely little girl. We stopped to sing along and be respectful. Then we walked to the starting shoot and stretched as best as we could. Less than a few minutes to spare, the gun went off. I didn’t realize that the course had changed, I did absolutely no research for race day!

I will say, I wasn’t really prepared for the hills in this race. Nothing
dramatic, but my legs were definitely feeling them. I appreciate the
water stations at mile 2 and 4, they were helpful. They offered water
and Nuun, but I just stuck with water since I was only doing the 5
miler. I don’t think I actually drank any, just took a sip and got my
mouth wet.

My legs were pretty heavy from my Midtown workout on Saturday. But good thing J was ready to go. We kept reminding ourselves that we had games after the race and to take it easy. We easily kept our pace around a 9:30 min/mile. However, the last mile we kicked it into gear and the last 0.4 was pretty much downhill and then straight away, which helped tremendously.

It was awesome to come down the shoot to someone yelling my name. As we had about 0.1 of a mile left, to our left was Sarah with her phone recording us! I waved as a crazy person told her hi, and then we finished the race together. Of course, J was trying to let me ‘win,’ but I told him to knock that off and let’s finish together…and we DID!

As we crossed the finish line I took a few seconds to regain my breath and realize I needed to turn off my Garmin. Since I hadn’t run in a while and I completely forgot how to end the run, so it kept running until I realized I didn’t stop the run. So my Garmin time is off, look at that last 0.07 of a mile. Normally the course clock is worse than my Garmin, but not this time!

There was an older gentleman who J and I did not want to be us. Toward the end, he was coming for us, hard, but eventually, he scaled back. But at the end of the race, we looked back to see how close he actually was, only to find out he was a race bandit. He apparently ran the whole race and didn’t pay for it, so he just skipped the finishing shoot. For some reason, J and I were pissed that he did that. We really couldn’t be too mad, since J has met me on a course before and didn’t pay – RTFTH he ran half of it with me. I know race bandits are highly frowned upon, but this one really made me mad for some reason!

We didn’t have much time to hang out and participate in anything after the race. However, since it was on our walk back to the car, we grabbed a non-alcoholic beer just for fun. I was interested to see what it tasted like. It was actually better than normal beer because it was slightly sweeter. After we each took a sip we threw it away. They had a real beer garden, but we just walked past it! 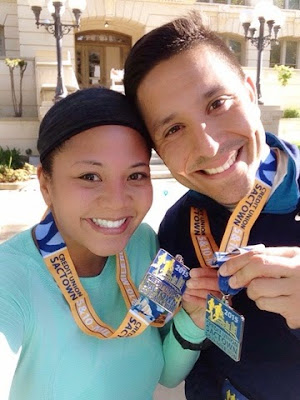 If someone asked me if I’d run it again, I’d probably say yes to the 5-mile distance, but that’s it. The old 10-mile course was much better and they offered a relay option too. I’m not sure how much I like the changes, but I do adore the new shorter course distance.

5 mile warm-up for our soccer game, no biggie!

Where in the Interwebs is WIAW