A whole year of Roses & Thorns!

Rose: Being active ALL weekend, with lots of soccer!
Thorn: Relationship stuff with J…

What the summer? Why was it so freakin’ hot this weekend? Oh well, I guess I can’t complain, I’m a summer lovin’ girl at heart! The WWC started this weekend, but it sure didn’t seem to have the excitement and hoopla that the men receive, but as is expected. Lots of watching and playing soccer this weekend, as it should be for two soccer players who are dating 🙂

Just for fun, here’s my first EVER Rose & Thorn post! Apparently I missed a few Mondays, because one year from this post would be Cinco de Drinko, weird!

Friday
I was on a donut high all day, but when I got off work J and I napped, until it was time to get ready for our double date with the Wench and her hubs! We’d been planning to go out on Saturday night, but a last minute request to babysit made us move the date. We met them at California Pizza Kitchen (CPK) for drinks and dinner, then walked next door to the movie theater to watch Entourage! It was like a two hour long episode, it was great. I loved it and can’t wait for the next one, come on…you know there will be a 2! I loved how they brought tons of people from various episodes to make cameos, it made it that much better. Us being the oldies we are, said our goodbyes, parted ways, and called it a night.

Saturday
It’s been really nice to be able to attend Saturday 8AM workouts with Bobbie. Sometimes life get’s so hectic on the weekends that I have to forgo them, but lately haven’t had too and it starts my weekend off just right! I sported my Alex Morgan tee and worked out on ‘turf’ in honor of the WWC starting 😉

After class I headed home and whipped up breakfast for J and I. I’m pretty sure this was the first time I’ve made over easy eggs and I didn’t do so bad! I gave myself a small pat on my back! After breakfast we decided to bike to the farmer’s market. However, since I have taken my bike (named Lulu) out since last year her tires needed fixing. J borrowed his brothers bike and it was ready to ride. So we walked our bikes about six blocks to the closest bike shop, but they only work on cruisers so they couldn’t pump up my tire. Then we walked three more blocks to the next bike store and they hooked my tire up! Then we were off to the farmers market.

Gotta love the Midtown Farmers Market. They have a bike valet, run by the local bike association. It was awesome, no need for my clunky bike lock I was toting around in my backpack. It was later in the morning, when we arrived and we missed the donuts we were looking for. However, we tried more of the fruit from last time and decided to buy a handful of Pluots (my fave)! J also reminded me to grab my Mint Ginger lemonade too. The Sac Co-op was handing out samples and they had the most refreshing Mint Watermelon salad, which they were handing out in generous portions.

We didn’t stay too long because we had to get home to watch the UEFA Champions League final. Congrats to Barca, everyone though they’d smash Juventes, but they didn’t. Gotta love watching good soccer! After the game we had to go help J’s uncle for a bit. Then we hung out until it was time to head to J’s indoor soccer game. During the game J’s brother (and fam) dropped of his nephew/Godson for us to watch for the evening. He was the cutest sleeping little lovebug ever. It was so hot and loud in the arena, he finally woke up to hang out with us all.

It wasn’t a bad game, but it wasn’t a good game for the Scorpions either. It was interesting knowing so many people on the opposing team, they are the other local team in the league. After the game we bundled him up in the car and headed to grab take-out and then head home. It was fun to have dinner with the little guy. I love watching J interact with his Godson/nephew, he’s really, really good with kids. Not long after we all ate, they came to swoop up E. After they all left, we were exhausted and just lounged until we fell asleep.

Sunday
J was up early to head out to a 9AM game, so I didn’t sleep in too much. We went to bed fairly early, so it didn’t feel like an early wake up call. He brought me coffee and toast in bed, while we watched soccer. He had to get ready for his game and I, soon after, got ready for yoga at Midtown. Since Lulu was ready to be rode, I decided I’d take her to Midtown instead of driving. My booty and legs felt the effects of riding her the day before, but after a few minutes the uncomfortableness went away. 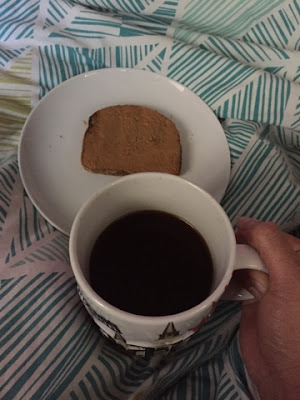 My knees have been hurting a lot lately and I really felt it during yoga, especially when you transition from downward dog to jump/walk up to the front of your mat (is there a name for that movement?). But I got through it, albeit the sweat running down my arms, back, boobs, and forehead! I biked my sore, but happy butt home in time to change, freshen up, and grab my soccer gear.

J met me at our last co-ed game of the season. It went well for us, not so much for the other team. They were short players, so the refs agreed with us to cut the game short. That and everyone wanted to go grub on the traditional tacos, beer, and margarita’s. Every season the organizer hosts a little taco bar in his driveway, which is right next to the fields. Super convenient and really good, whoever they use to cater is on point! This year, they were even offering tequila shots and giving away shot glasses when you took one. Since tequila and I are divorced, I slowly sipped on half of a margarita before handing it over to J. I did eat my fair share of tacos. After lounging and chatting with everyone for over an hour, two of the girls (T&T) and T’s daughter, and I headed to get Starbucks and pedicures.

It was a lovely and much needed treat for my toes. As I was sitting there, drying my toes I got a text asking to sub in a co-ed outdoor game at 4:30PM. I was already gross from my previous activities, but I wasn’t sure if I wanted to ruin my pedicure. RIP pedicure! I said my goodbyes, ran a few errands at the mall, stopped by the house to get fresh clothes, and say hi to J! Then I was back at the field for another game. Why they have games at the hottest time of the day, is beyond me! Luckily there is a ‘heat rule’ where you play quarters, so everyone can have water breaks. We squeaked away with a win, even with one only girl sub for the team. I only knew one girl on the team, but had a decent time playing.

As I was getting settled into my car, I saw a text from J. We got asked to play in another game at 7:15PM. Well J did, then asked if they needed girls, of which the answer was yes. I drove home, showered real quick, then we were out the door for both of our third game of the day! I thought this was going to be an easy game. Nope! At first there were no subs, then Jess showed up and we had one girl sub. We got killed, but I felt like I played decent for it being my third game in the heat! I was really worried how I’d feel today, but luckily I’m feeling decent. Vega and Motrin, they are the perfect elixir! We both were too exhausted to cook or deal with the kitchen (and our broken dish washer) so we grabbed takeout before we headed home.

Enjoying a well deserved meal together, we grubbed on one of our go-to meals from Buckhorn. I was craving fries! After dinner and a shower, we settled in to binge watch our new show Silicon Valley. Yes, I realize we are two seasons behind, but it’s good so far. We didn’t last long, the day was finally catching up to us!

A Local’s Persepective on How to Eat Like a Local – Sacramento, CA