Domesticate yourself.
Learn to cook. It’s shoved down my throat all the time. You spend all your money on going out. Blah. Blah. Blah.
I cooked. It sucked.
It doesn’t always, but this time it did. Yes, I could have picked a recipe with less ingredients. Yes, I could have thought it out a little more – although, I thought I did.
I really enjoy Indian food when I go out to get some, which isn’t often enough. I love the flavors and that naan, oh that naan. It’s bad, I can eat about five servings of that delicious, warm, carb laden goodness. I digress, sorry. So, Pinterest floods me with ‘easy’ to make Indian recipes. I’ve pinned a few, but never tried one. Then Chelsea at Chelsea Eats Treats recapped it last week and I saved it. I Crtl+C and Crtl+V in an email to J and we decided to give it a go.
Original recipe from Sustaining the Powers: Skinny Slow Cooker Chicken Tikka Masala
Another alluring factor was that it was a crock-pot recipe. Oh haaay! Both J and I’s response to the recipe was, “that’s A LOT of ingredients!” After skimming it, I realized I had about half of the ingredients at home. So, we went for it. Since everyone is always saying cooking at home is best, I figured I’d give it a try.
Items I Had At Home: EVOO, Paprika, Salt, Cinnamon, Black Pepper, & Cornstarch.
Thinking Trader Joe’s would suffice the rest of the list, we headed there to grab everything and our weekly groceries. I was wrong.
Trader Joe’s Items Purchased: Chicken, Tomato Paste, Greek Yogurt (2%, gimme the protein), Coconut Milk (organic, fancy and shit), Garlic (the stuff that comes already made and ready to use), Cumin, Cayenne Pepper, & Bay Leaves. $21.67

Okay, still missing a few items. We mixed all these items and put them in the crock pot and decided to finish and cook the recipe the next evening (Wednesday). Since we still needed more stuff, we went to good ‘ol Safeway.
Safeway Item’s Purchased: Can of Diced New Potatoes, Yellow Onion, & Ginger. $2.78
*I refused to pay almost $7 for a jar of Coriander, literally refused. That is crazy!
So, we still needed two spices! Ugh, I was annoyed, but still hopeful. We then ran our other errands, which got postponed thanks to the tardiness of J’s barber at  Bottle and Barlow (rant waiting to happen). She was 24 minutes late for his scheduled appointment. Rude! After all that, we had to still go to the Sac Co-Op to grab the last two spices…fingers crossed!
Sac Co-Op Item’s Purchased: Cumin & Garam Masala. $1.66
*How the hell did I forget about their amazing ‘Herb & Spice’ wall? I should have went here off the bat, fresh and local. My own fail, again. 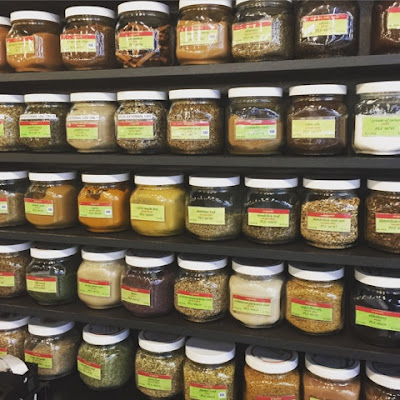 So, there you have it. Three stores. $26.11 spent.
But I cooked right! So after we got home and added the remaining ingredients we opened a bottle of wine and waited for the crock pot to do it’s magic, and potentially ate 75% of a bag of chips. I went off of Chelsea’s time of approximately 1 hour on high would suffice. The actual recipe calls for 6 hours of cooking in the crock pot. Nope, my crock pot and I have become acquainted and it cooks stuff way faster than that. I guessed on the Chelsea side, but was wrong. It took closer to 2 hours. So at the 1.25 hour mark we decided to order pizza, but they were closed!
We both just ended up making something we could scrounge up. Tikka Masala would have to be for another day. The aroma was filling the downstairs, quite pungently, and deliciously.
I was nervous. I cut the recipe in half. Thank goodness for Google’s conversion quickness, it helped me during the prep time! I decided I’d try the meal at lunch, by myself — then if it was horrible I could throw it away before J got home. 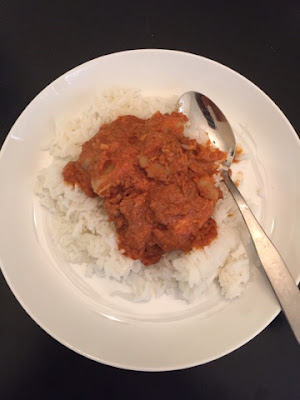 You know what. It wasn’t bad, it was okay. I need to tweak the spices a bit, but it was pretty tasty. Except…the heat built over each bite and by the end I couldn’t hang. It was too spicy. You all know I suck at spice, so I should have dumb down the Cayenne even more.
J’s ate it for dinner last night and he said he liked it. He complimented it and cleaned his bowl. So I’ll take that as a win, unless I hear otherwise. I’d still like to tweak the recipe if I make it again. There’s plenty more to eat, so I will deal with spice and eat lots of rice!
So, yes. You pushing your cooking nonsense on me is bull shit. I did it. I do it. And I’d rather go get something to eat. The cost-benefit ration for cooking for two versus getting food for two is about even. It’s more in favor of going out, if you try a recipe that calls for a million ingredients 😉 It made for a funny story and a good laugh at ourselves.
I’m honestly not that bitter about it. But I would prefer if everyone would stop telling me to cook at home all the time. I do when I want to and I can, when I want. It’s pretty much that simple. I guess I better go find another recipe that calls for similar ingredients, so they won’t go to waste!
Cooking is overrated. Eating is NOT!

I Need Your Help!