Momma Bear has been on a mission.

And of course, her highly skeptical daughter (re: me) had something to say about it. When she initially told us she committed to the local Results 20 lb challenge, I scoffed. Then she said she was forced to do two challenges, I was pissed.

In retrospect I still don’t care for the way Results runs their business. I’ve also heard some unsavory things about the owners, but there are always two sides to every story. However, they are the push that Momma needed. They are helping her, motivating her, and guiding her to a healthier lifestyle — even if I think they are slightly robbing her in the process.

She lost 20 lbs and won her $500 back. She is currently on her second challenge, just 6lbs shy of meeting her goal with one week left. She’s been avoiding many outings that involve food, but not all. Her life is consumed by Results and her FB is there to prove it.

I am proud of her.

To show her my support and solidarity, I told her I’d eat her ‘meal plan’ for the remainder of her challenge. There was a caveat, since I have one dinner planned with a girlfriend, which has taken forever to plan, I’m not canceling. My stipulation was, she had to make it for me. Demanding, huh?!

Well she made me most of the food and also wrote out the plan for me. On Monday night I stopped over to swoop it all up. She has this down to a science since she’s been eating the same shit for almost 11 weeks. Tuesday would be my day to start.

Here is the gist of what you eat:

The object is to eat every 2.5 to 3 hours. There is also a pamphlet which outlines the four top proteins, carbs, and veggies they prefer you eat, with a subsequent list that is recommended but NOT the best option. There is also a list of seasonings and spices you can use to flavor your food. Since I can’t do hot sauce, that leaves me very limited in my options. This is pretty much what Momma Bear has been eating for the last eleven weeks, so I’m pretty much sticking to it with her. 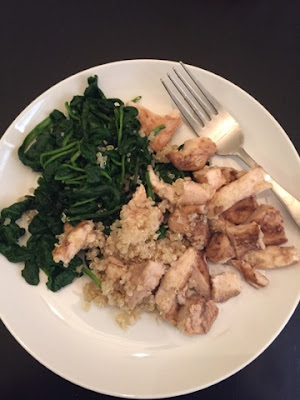 After Day One, I realized I can’t eat steamed spinach every single meal. I just can’t. I think it’s a texture thing. So I perused the list and then went to Trader Joe’s and picked up some asparagus and broccoli to mix in. Momma already made me a bunch of steamed spinach, so I will use it in some meals, but not all three. I also bought some brown rice, since quinoa isn’t my fave either. Many, oatmeal is so much better with sugar and a little rice/soy milk. Dry as a bone, it’s hard to choke down :/ 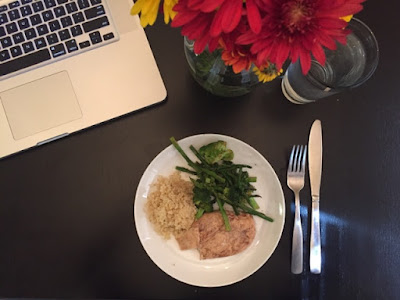 I give Momma Bear props for doing this for so long. It’s hard. It’s hard to not eat all the fatty stuff. It’s hard to eat all this food on the plan, weirdest part of it all. I am a little worried about when she stops eating this way and goes back to being indulgent and gluttonous. She said she will start slowly, for fear of her stomach hurting and gaining the weight back. She also said she is going to stay at their gym and has access to unlimited classes, for a pretty penny. So I’m not that worried. I, along with everyone else, will help encourage her to keep at it, since she worked so hard over the last eleven weeks.

I don’t think a place helping you lose weight should make you login to Facebook. I also don’t think they should force you into a second challenge. I think they should educate you what a BCAA is and why you are taking it. I think they should offer you suggestions for a protein brand and offer samples, before you are supposed to spend $60+ on a tub. Those are just a few of my thoughts on how they should improve their process, but I’m just an outsider looking in.
They are doing good. That’s all that matters. Momma’s getting healthy and a little side effect is that Poppa bear even eats these meals too. Not all the time, but on occasion he has.
My only hope is for Momma Bear to be happy and healthy, how she get’s there is her business!