The checker at Safeway sure did. It didn’t help that he was Mexican and a self-prescribed cook of his household. He saw the ingredients and said, “oooh, enchiladas!” To which I replied yes, but made the fatal mistake of telling him I was making “Easy Chicken Sour Cream Enchiladas,” to which he gave me a pretty gnarly look and laughed. He then questioned baking sour cream and told me, “good luck with that!” What a nice fella!

What he doesn’t know is that I’m just a girl trying to get better in the kitchen. I still follow recipes to a ‘T’ and I’m okay with that. Practice makes perfect and those who have to suffer through my practice still love me! So, hell YES, I use Pinterest to find recipes that I want to try and I make them, even if they require baking sour cream!

I stumbled across this Pin, which lead me to Jill at Sandy Toes & Popsicle’s. A little over a year ago she posted her recipe for Easy Chicken Sour Cream Enchiladas (Your Family Will Love). I love how bright her images are, my kitchen is not equipped for such amazing food prep photography. I don’t even care if they are staged — they are still bright, colorful, and very helpful.
Easy Chicken Sour Cream Enchiladas

Shredded chicken $4.68 // Bought a large package of boneless, skinless chicken to boil, but will freeze the rest, so that is a portion of the overall total
Onion $0.86
Olive Oil $0.00 // Had at home
Sour Cream $0.40 // Shared a package with J, since he is cooking something else that needs this
Parsley // Didn’t buy any to add to recipe
** Fage Greek Yogurt $0.94 // To be a little healthier, I will not use a full cup of sour cream and will mix in Greek yogurt
La Victoria Enchilada Sauce $2.99 // So many options in the ethnic isle, went with her recco
Mexican Cheese Blend $2.50
Flour Tortillas $1.99 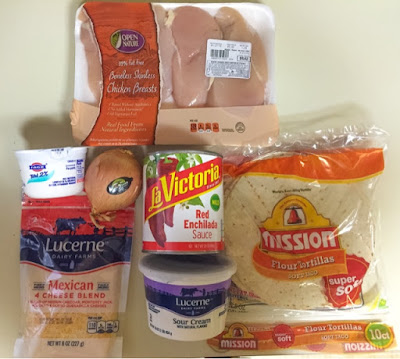 I even made it on a week night, look at that! It wasn’t that bad at all! Everything had to be made, no rotisserie chicken for us. My parents love those things, but I feel like they are pumped with sodium, even if they are really convenient. I stick with the boring skinless, boneless breasts. While I boiled the chicken I worked on getting a few things prepped and even doing some laundry. 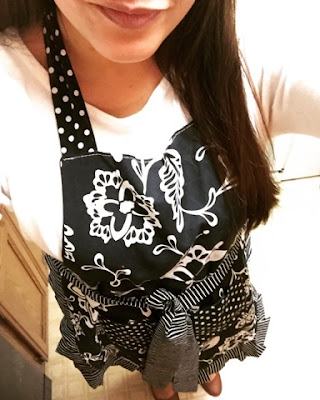 But first things first, I had to throw on my fave (re: only) apron. A) Because it’s cute, B) Because I had a white shirt on, and C) Because I feel legit! I’m pretty sure it was a Groupon come up, that’s been waiting to be used for years 😉 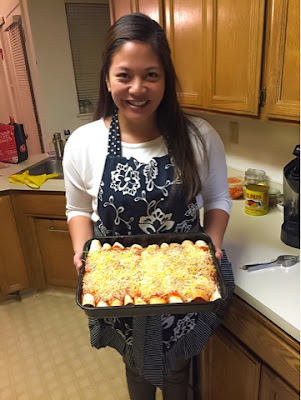 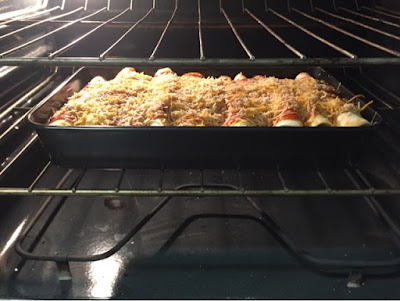 Anywho, it was fun making these while L did homework and J helped by making Spanish rice. Since everything was cooked, we didn’t need to bake them long, just enough for the tortillas to get a little crispy and the cheese to melt! 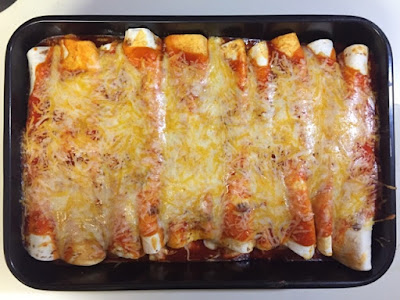 Dinner is served! Kid approved! These are very non-Mexican, authentic enchiladas. But they are adaptable and I think a great basic recipe for anyone to try. I don’t think J or L even noticed I snuck in Greek yogurt instead of using all sour cream! Everyone liked them, well J had to add hot sauce and said there were too many onions, but he cleared his plate! 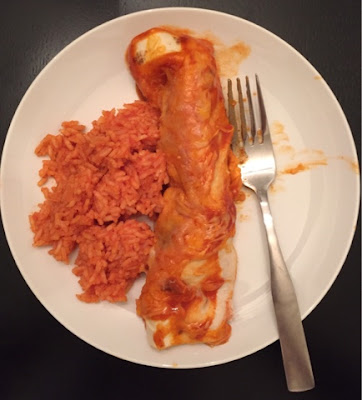 Enchilada’s aren/t the prettiest to plate when scooping them out of the pan, but they tasted delicious. I’ll take this as a #NailedIt! I’m enjoying trying new recipes and getting out of my comfort zone a little bit. I think next, I want to try making No Bake pork chops, hold tight for that post! I hope these posts are amusing you in the slightest bit. They help me stay accountable, even if the food photography is horrible 😉
I should rename it, diary of ugly food photos (mine, not Jill’s)!!