Pioneer Woman, I see you.

Well, really, Pinterest saw you first, then I followed soon there after. Have you heard of her? Is she like Paula Deen? Does she thrive off butter? Why is her name so old school? These are some of the random thoughts I had when I originally heard about her. I’ve perused through her cookbook and recipes, but I never thought to commit to one.

Let’s start from the beginning. A month or two ago I was at Costco and tried a sample, it was delicious. It was a biscuit. I didn’t think anything of it, until I was looking for eggs on my last trip and I saw a package of biscuits for $0.97. I asked a fellow shopper if I was reading that sign correctly. They confirmed I was and we sat there in awe, for a couple of seconds, that something at Costco was $0.97. Since working with Costco has been part of my career, I knew that it was probably coding out or being discontinued. I looked at the date and it read Best by 3/16/16. I had a a month to eat them. Score! I grabbed a package, I had too. It was too cheap not too, it was a ‘principle’ thing.

Now, I have three separate packages of biscuits. What the hell am I going to do with them? My first thought was biscuits and gravy! I never order this at restaurants, but I’ll take bites of someone elses if they order it. Its just not my favorite thing, but I enjoy it!

So, off to Pinterest I went. I wasn’t going to waste $0.97, I was going to cook those damn things! I pinned three gravy recipes and eventually went with the Food Network’s pin of a Pioneer Woman Sausage Gravy recipe. In all honesty, I think I used her’s because it had the least amount of ingredients. We all know my weird lactose kinda-intolerance, so I was a little hesitant to make something with whole milk, but so far nothing too serious has happened.

Since I skipped my long run, I felt it right to at least get my butt up and cook something for our family. So I ran to Safeway to grab the minimal ingredients and a few other things for the weekend. Then I got home, made some coffee, and got to work!

L helped me remove the ‘breakfast sausage’ from the packaging. I despise touching raw meat, so does L. We were squirming as we took pinches of meat out to make them in smaller pieces. Once it was all in the pan, I cooked it, then we slowly added the flour to the meat. L measured the milk and slowly pour it into the pan. After the 3 cups of whole milk were in there, I started to panic. I know the recipe said 10 to 12 minutes of stirring, but it wasn’t getting thick like gravy, I was just impatient.

All the while, the oven was reaching it’s temperature and the biscuits were baking perfectly. Do you use the dark baking sheets? How many times did it take for you to realize that they cook faster than the not-so-dark baking sheets? Oh, well maybe it was just me! But I’ve learned and now lessen the cook time when I use them. They came out golden and looking lovely. I should have waited a bit longer to bake them, so they came out warm and fresh when the gravy was done. Oh well, it all worked out!

Back to my gravy that wasn’t thickening, just as I was starting to fret, I realized it was thickening. Then, I just started adding in seasoning – sea salt, pepper, and garlic powder. I just added whatever I wanted, I didn’t measure anything. Another little pat on my back, I’m getting a little more comfortable not relying 100% on a recipe. It’s the small things, don’t judge.

I made J try the gravy a few times, so I could adjust the flavor. He gave it the go-ahead and then it was time to eat our (late) breakfast. I also warmed up some hash browns to go with our biscuits and gravy.

Biscuits and gravy was a success. Even J’s godson was enjoying it with us!

I’m glad I decided to invest in those ridiculously low priced biscuits. They were a baller-on-a-budget price and they encouraged me to make something new! Just cause I know you are extremely curious, we used one package for breakfast sando’s for dinner and the other still remains unused. We have a couple of weeks to come up with another idea or repeat our use. Best purchase I’ve made from cost, maybe ever!

And because this kid is just way too cute not to share with you, we headed straight to the park to burn off some of our calories after our late breakfast! 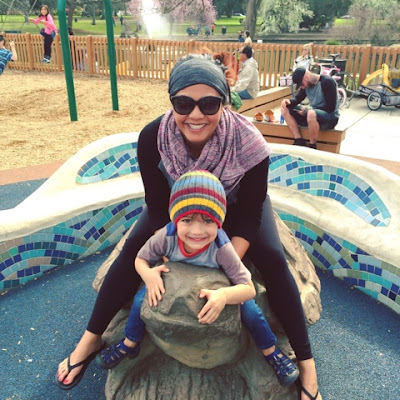 Thinking out Loud – It's All in the Name