Are DAYcations still a thing? 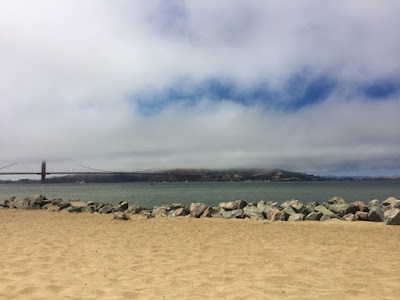 Or is that an old term? Anyway, us lucky Sacramentans can basically go in any direction for about an hour and half (give or take fifteen minutes, not including traffic) and find ourselves in a place that is completely opposite of Sacramento.

A free Sunday, barely ever happens. My craving for Vitamin Sea is forever there, so when there was NOTHING on the calendar we took advantage of it. We thought maybe we forgot about something, but alas we didn’t. No soccer. No baby shower. No bridal shower. No birthday. No wedding. Nada, just a day of J and I exploring and spending time being present.

I was hoping the weather would get warmer, but SF continues to be stubbornly foggy and overcast. We aren’t ones for traffic, neither of us enjoy the driving part of any trip, so we got up early to get our day started and hopefully avoid any random holiday weekend traffic. We decided to grab some quick caffeine, so neither of us would be too grumpy 😉 J had done some research and we made our way straight to Mama’s on Washington Square, only to be greeted with a line that probably would have taken over three hours, if I had to guess. We even parked and got in line, but both decided this was going to take way too long.

I busted out the trusty old Yelp to see where else we should go. We found one near Mama’s, but that one also had a huge line, probably at least a two hour wait. I tried to move a few more miles away, basically circled back to where we started, and it was gross. We parked near a very seedy part of a random street, walked to the next stop and it had another long line out the door, but not as long as the last two. But wherever we were, I wasn’t trying to hang out there. I wish I could remember the name of these two spots, but I can’t and Yelp won’t let me look back that far in my search history! Yelp was too spot on, anything that was near with 4 stars and lots of ratings was where the all the people were 🙁 Then, I really changed it up and looked for somewhere in the Marina/Cow Hollow area, since we always find goodness there!

That’s where Cafe Golo became our knight in shining breakfast! We parked easily and walked right in. At first I was a little hesitant about this tiny little nook of a restaurant, I’m not exaggerating how small it really is. The staff isn’t the friendliest and they want to maximize space, so you better listen to where they ask you to sit. They had a case of baked goods, but it kinda scared me. Their bathroom was decent, except for the window that had a cloth covering it, but was missing the window part…I presume.

All this aside, the food was AMAZING! J ordered the Chorizo Tacos and I ordered the Golo Ranchero with linguica! I asked for the salsa and the beans on the side for J. We both sipped on boring ‘ol H2O, since we’d already guzzled down coffee’s on our way to the City! They gave us two little, really small bites of two different baked goods. A faux free appetizer, if you will. I wish I could accurately explain how simple, yet amazing the flavors of my dish were. Everything was fresh and the portion size was just right. J’s tacos came fully stuffed and they didn’t skimp on any of the taco filling…at all! The service was just okay, but the food more than made up for it! 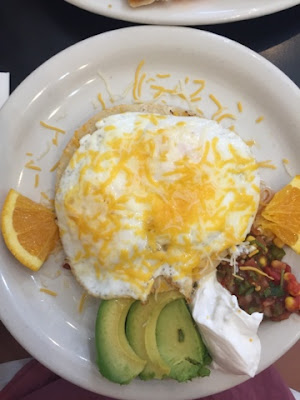 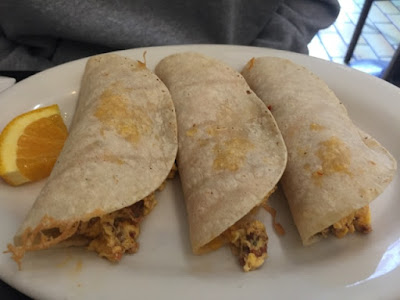 I knew the beach would be too cold this early in the day, so we needed something to do. It was also too early for dessert, darn! So instead, we looked for the local Spurs (Tottenham) bar so we could watch a Euro Cup game. We had some time before kick off and the Painted Ladies were super close, so we decided to play tourist for a quick second. J had no idea what these iconic homes were and really didn’t care, but I was excited to go. Except, they should be called the ‘Faded Ladies’ because that’s what they look like. There were tons of people spread about on the hill across the street from the homes. People, including myself, even went and snapped pics on the steps of the houses. The park across the street is undergoing a remodel, so the grass was drought colored and very ugly. 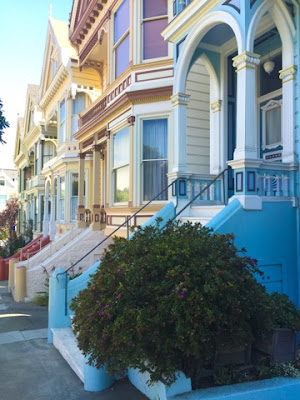 With plenty of time to spare for the kick-off of France and Iceland, we arrived at Danny Coyle’s to secure a good seat. We parked in front of the cutest little wine bar, Nectar, and I had to snap a quick pic of the cute exterior. Little did we know this is where the France watching party would be. That group was a riot, they were so prideful, whooping and hollering the entire first half. It was fun to watch them as we sipped on libations, especially since France was killing the Cinderella story Iceland. We decided to leave at half time, since it was an ass-whooping. I know J was happy to be at the local Spurs bar too. 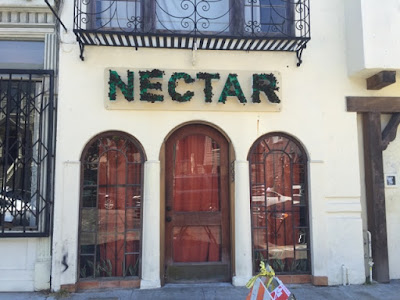 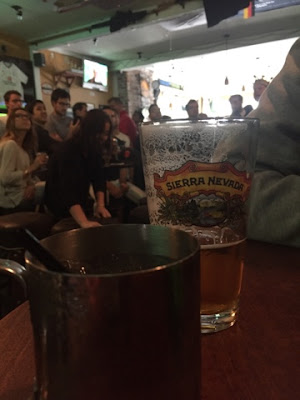 The weather was looking warmer near DC’s, but I knew it wouldn’t look that warm near the water. But since I’ve been asking for the water, J was making my wish come true. What a gentleman! We normally head to Baker Beach, but we decided to switch it up and hit up Crissy Field Beach this time, despite it being completely overcast. I think the ratio of dogs to humans was almost even 😉 We found a nice little area to settle down and we sipped on some wine, listened to the water, napped a bit, and hung out. At times, the sun would peek through the clouds and it felt glorious, but it was very few and far between. After awhile, it was time to get moving again. 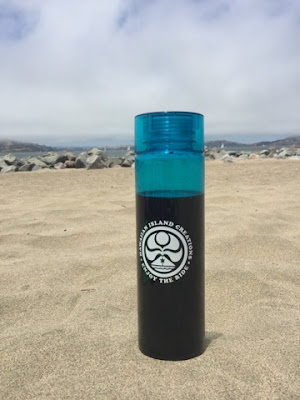 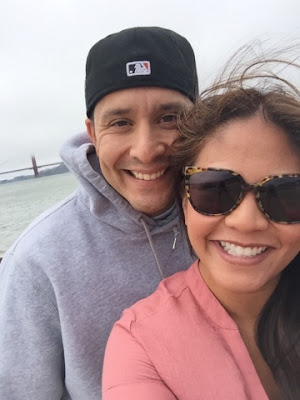 I’ve been following Off the Grid SF on Instagram for awhile now, which also goes by Presidio Picnic. But we are rarely here on Sunday afternoons to enjoy this event. But finally, the stars aligned and we decided to go check it out. I will say, their Off the Grid brand has grown and now Sacramento is part of their party and I happened to hit up the first one at the Crocker last night. They’ve been having Sunday events for a few weeks now, I’m still trying to get to one!

I’m not sure I knew what to expect. But what I saw I loved. I loved that they had a mixture of food trucks with a variety of food offerings, booze tents, tents with local vendors that probably don’t actually have food trucks, luscious grass to lounge on, bathrooms that aren’t gross (but a-hole Porsche drivers that speed through the bathroom area), and a great view of the Bay. Overall, then entire vibe is awesome — family friendly, group friendly, friend friendly, everything friendly! We had to walk around twice to take in our options, we both weren’t starving, but we were kinda hungry. We ended up with a burrito, a bulgogi skewer, and potatoes from the Slightly Skewed truck, which hails from the Sacramento area. I grabbed some nachos from Nopalito, while J waited for the other food. 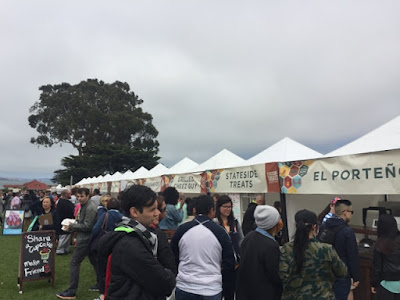 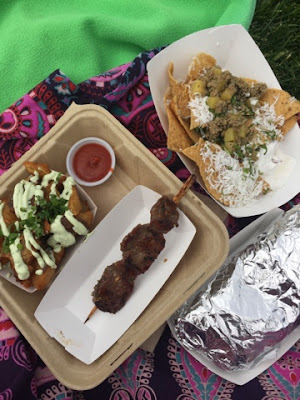 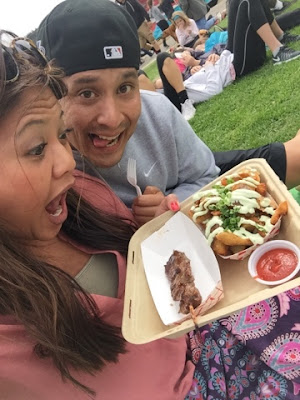 There were so many other good options too, some being fresh baked pizzas, BBQ, a crab sandwich…just to name a few. I found a little free area and we settled down to grub and drink more of our wine we had from the beach. It was super relaxing and tons of people watching to be done. After my stomach settled from the food, I was on a mission to get something sweet. I went back and forth between gelato and something baked, but CupKates (truck, even though it was in the tent section) won! They were running out of everything by the time I got there, but I was able to get a Snickerdoodle and Apple Pie cupcake, both of which were amazing and rich! 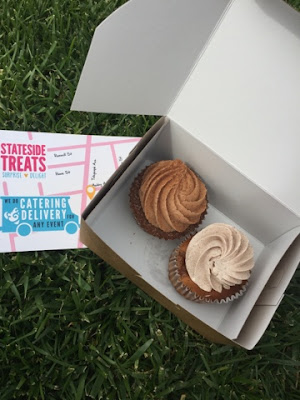 While J napped for a few mins, I sat and people watched. After we’d taken in all the goodness at the event we headed back to our car to head home. A successful day in the City — eating, relaxing, touristy things, and being together. These day-dates out of Sac are rare, which make me appreciate them more. It also makes me appreciate where we live, we are so close to so many different traveling options!

On our way home, we stopped at what I guess you could call my favorite Chevron gas station. I say favorite, because it is the cheapest one between Sac and Benicia and I would always stop there for gas, on my three year long commute. Lucky for us, the field across the way was blooming with sunflowers! My heart was happy to see this and I told J we couldn’t leave without taking pics of them, which he obliged! It literally made my sixth grader heart happy (I was obsessed with them at that age)! 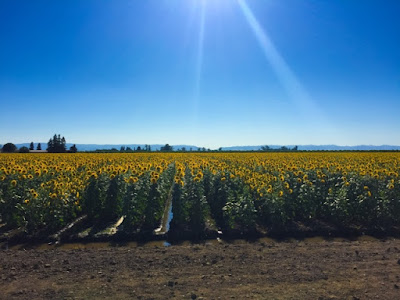 Thinking Out Loud – Back At It