Well, that’s what this trip was supposed to be anyways. Lil was going for a wedding and extending the trip to celebrate her big 3-0 out there. My parents hopped on board and I pretended to bow out due to finances. But all along, mostly, I knew I was going to go.

I went to great lengths to make sure she thought I wasn’t going. Booking her a sky diving adventure solo for her present, even though I was booked on the reservation too. The Pacific Skydiving Company was awesome in executing it so it looked like it was just her.

But apparently, our family isn’t used to vacations without all four of us. This will always be a funny story to reflect on for all four of us, but the Parentals tried their hardest, but kept slipping and mentioning me, my luggage, and my trip there 😉 Anywho, by the time I got to baggage claim the gig was up! HAHA!

She said she was happy I was there and that it was a little weird that I wasn’t. I’ll take that, even if it was said to be nice and not particularly true 😉

Sacramento only has one flight out to the islands if you use Hawaiian Airlines, which leaves at 7AM. Sadly, due to some unforeseen circumstances we had to change J’s flight to leave two days later than I, so I traveled solo. Luckily, my neighbor was a nice woman who was making the big move to Hawaii, so we had an enjoyable time with 5 hours on our hands. 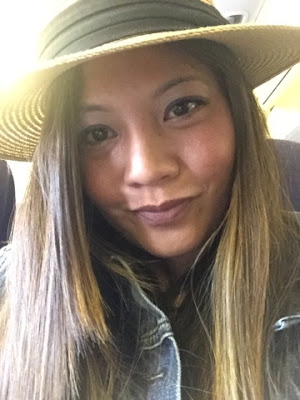 The Fam was starving when they picked me up, so we went straight to our family fave Like Like Drive Inn Restaurant. When my cousin moved here over two decades ago and we visited and he took us here. It has been a staple stop with every trip we’ve had since then. It’s just good ‘ol Hawaiian home cookin’. No frills and the staff is pretty non-expressive, many are older women who all wear the same Hawaiian dresses. Even though I wasn’t particularly hungry, I ordered like I was anyways.

After we were all uncomfortably stuffed with delicious grindz (food in Hawaiian), we headed to Ala Moana. This is their huge, partly fancy, partly normal people outdoor mall. The Parentals have always given us a little vacation allowance and even though I’m 33, this trip was no different. I decided to splurge on a 808 themed Alex & Ani bracelet. I was excited to go into an actual store, I’d never seen one in CA. Of course I found the Lulu, but more importantly I found Vintage Island Coffee! I was full, but had to get my fave Mocha Coconut Freeze! We also hit up some local surf shops, Local Motion being my all-time favorite. 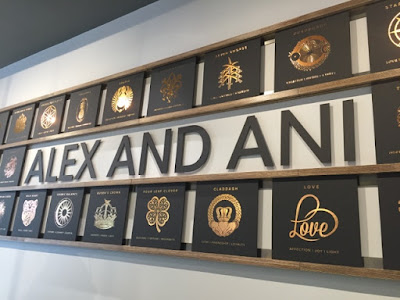 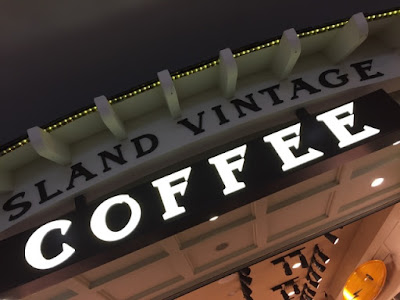 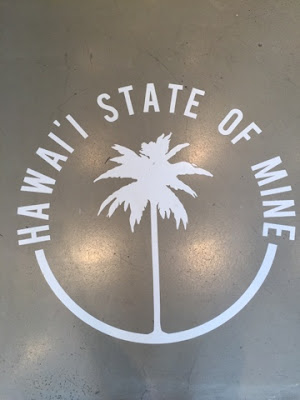 After we shopped Poppa Bear out, we headed back to the house we were renting. This in itself will be a whole different post, but one thing to always remember when renting a vacation home is “You get what you pay for!” 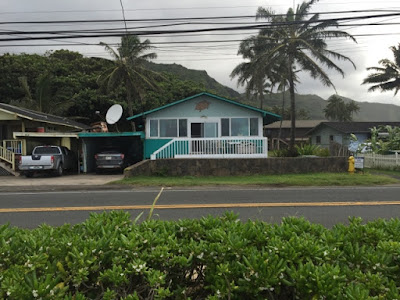 That being said, no matter how hot and muggy the house may have gotten, it was STILL a house in Hawaii. Regardless, it was in essence a true beach house with no central A/C and very old. However, the only thing separating you and the ocean was the highway. 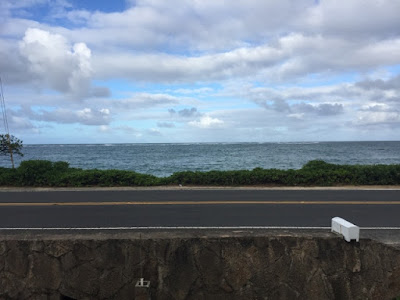 I wanted to get my toes wet before it got dark, so we walked across the street and hung out over there for a bit. Then we decided to head to dinner. My internal timing was all off, it was a three hour difference (behind CA), so I was all off. 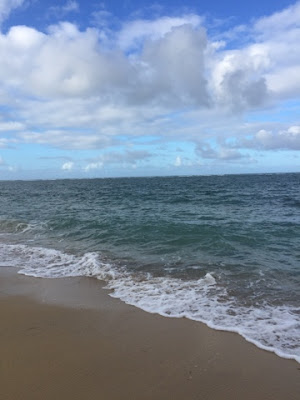 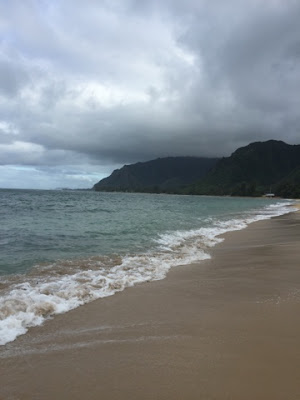 The entire trip, I never truly acclimated to the time change. Since we had a house on the North East shore, we weren’t near anything. Everything was at least a 20 to 30 minute drive away. So, to Yelp we went and we eventually decided to hit up Seven Brothers for burgers for dinner.

This place was busy, late on a Tuesday evening. We ordered our food and then tried to find a table, which we finally did. I walked over to TB so I could get a Pepsi on tap 🙂 The food was okay, I’d say say overrated, but still not too bad. After dinner we headed back home and I slept easily for my first night on the island.

Up crazy early, because of the time change, I just hung out at the house. Stared off into the ocean from the living room for a bit. 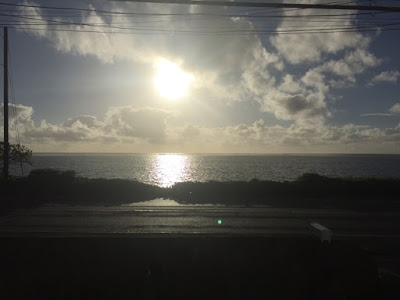 When we were all up, we decided to head to Hukilau Cafe. Best decision of the day!  Apparently Man vs Food has been here a couple of times. Again, it is one of those local, hidden gems. You put your name on a list and wait outside until they call your name. Cash only, too. Since we always want to try everything, Lil and I shared two plates. The pork chop breakfast plate and the coconut pancakes. The chops had lots of fat (where’s J when you need him) and were super thin. The pancakes had real chunks of coconut, not just flavoring, they were AMAZING! 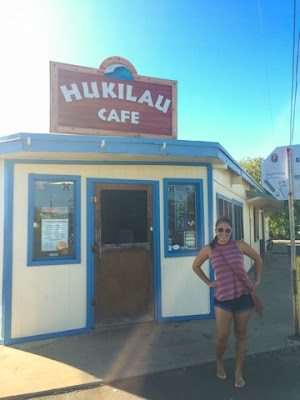 After that we headed into town. It wouldn’t be an actual trip to Hawaii if we didn’t stop at Costco. Poppa Bear loves that place. We stocked up on goodies, booze, random stuff we didn’t need (more bathing suits), and got some gas for the rental. Then we headed to the Hula Bowl (really Aloha Stadium) for the weekly swap meet. Again, just like Costco, it wouldn’t be a regular HI trip if we didn’t stop here. 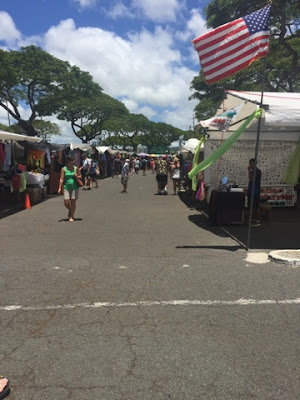 At this point, I’m kinda over going here, but the fam enjoys it. I love seeing the same old Hawaiian man cutting coconuts to sell fresh coco water. I enjoy the first ten tents that sell stuff, then them become repetitive. People don’t even haggle anymore, everyone seems to keep the same prices and no bargain shopping. It’s not that fun. Of course we bought some random stuff
to bring home, but nothing huge. It costs $1 per person (in your car)
to come to the swap meet, but we didn’t spend much more than that. It
was really hot by the time we got here. We only saw about a quarter of the vendors and then turned around to head back home. 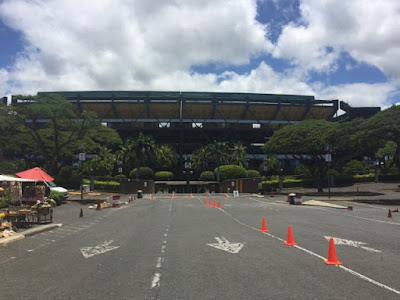 On the way home we stopped at Tropical Farms which was on the way back to the house. We were a little confused on what this place actually was, other than that they sell tons of macadamia nuts. One of their sheds read “Kualoa Ranch Hawaii” too. The had a huge store that sold various flavors of macadamia nuts, tons of scented oils, offered free mac nut coffee, and other 808 goodies. After you walked through the huge gift shop, you walk out into an area with more outdoor shops and an area where you can crack macadamia nuts, if the roosters don’t steal them from you. We witnessed it first hand, although super funny…because it didn’t happen to us! No one told me you have to crack through two shells, hard enough to crack through each layer, but not too hard to smash the actual nut meat inside! It was fun and luckily Lil had already been here, so she showed me the ropes! 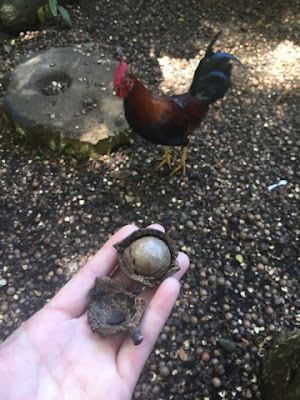 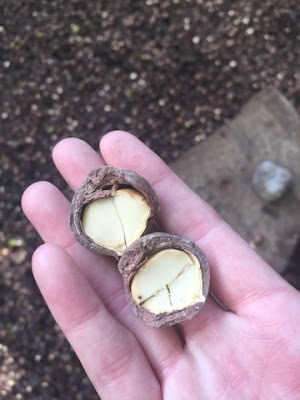 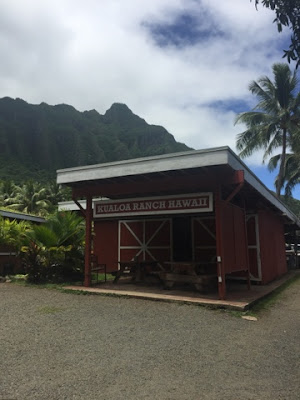 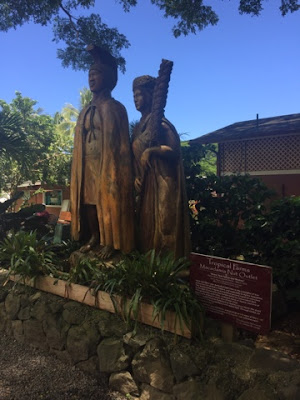 As we made our way back to the house, we were all in need of a snack, which turned into a meal pretty much. We stopped at Uncle Bobo’s Smoked BBQ to curb our hunger. Mom was the only one who didn’t get something to eat, but we all shared with her. They had some ‘original drinks’ which were really tasty, their Ginger Lemon Splash was refreshing and delicious. All the food was really good, but I wish they had AC to enjoy their food in. We sat outside, sweating, but enjoying our treats. Mom and Lil enjoyed shaved ice. We really enjoyed this place because Uncle Bobo and his wife (assumption) worked really hard and were really nice and accommodating to their customers. Their high Yelp rating was well worth it!

We dropped Mom off at the house and gathered our beach junk, then headed to our all-time fave beach — Sunset Beach! Just Poppa Bear and his girls! We just hung out for hours, tanning, swimming, reading, and lounging. It was so relaxing. We planned to see the sun set, but we decided we’d rather head back home before it was too late to shower and grab dinner. I found a swing (and another rope swing) that I wanted to try out. So Lil and I played on it, even though it felt like we’d break it! Swinging at Sunset Beach, life doesn’t get more perfect than that!! 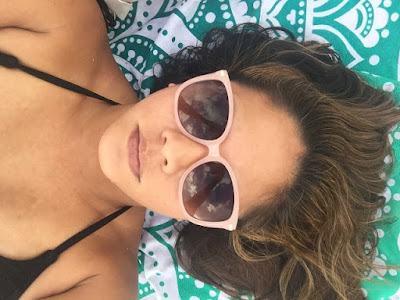 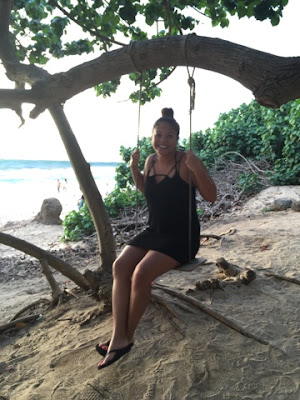 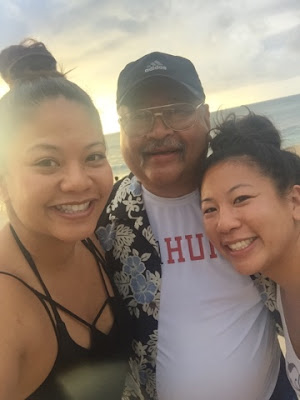 After we showered and freshened up, we headed out to dinner. Rain wasn’t going to stop us from dinner! We decided pizza sounded good, yes you read that correctly. Pizza! We drove the long drive more south to Kaneohe’s Boston Pizza. The pizzas were expensive, but that is because full pizzas were large and thin crust. They also had Chicago style pizza, pizza by the slices, as well as a handful of appetizers. From watching other customers, it was also BYOB or wine, if you’d prefer. I ordered a slice of the Pesto-riffic, which was really tasty. I’m not generally a fan of Chicago style pizza, but this one was so creamy and delicious! We also ordered a dozen garlic knots to share, which were pretty amazing and would induce plenty of burping post-meal. Jerks charge for ranch, ugh! It was all a little over-priced, but a nice break in our meal options. They catered to kids, even though none were there at the moment. They had toys and a huge chalkboard to play with, which I couldn’t pass up. 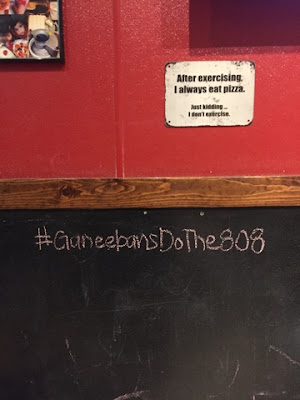 After dinner we stopped at a Foodland for something. But we couldn’t find the entrance and we all got soaked trying to get into the damn store. Poppa bear loves to stop in any FL he can, which we all do too, who am I kidding? We always ‘have something to get.” So we perused the isles and bought some goodies and their cool reusable bags, then finally headed home.

I was beyond ready for bed, but also super excited because J was coming to join us the next day! Sleep found me easily, as it did every night on the island. But morning always found me easily too, damn time change 😉 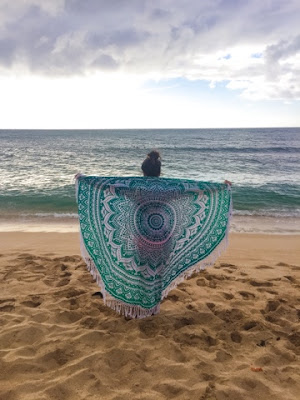