The CA State Fair is so misunderstood…

…like a solemn teenager. Maybe it’s because I’m born and raised Sacramentan OR maybe it’s because I love fried food, rides, animals, and everything California. Whatever the reason, I make it my summer goal to never miss a fair!

I’ll never understand those people who live in Sacramento for multiple years and have never been to or chose not to go to to the California State Fair! Sure it’s hot, sure it costs some bread, sure there’s lots of people. Sure to all of that, but in turn…that’s what makes it great!

I almost thought I wasn’t going to go this year. But thanks to J’s friends Alex & Melanie we made it happen. We were on the fence about going, but A&M invited us to go on the last day. We wanted to take L too, so it worked out perfectly. Also J’s Mom came with us too, which was a nice addition to the gang! The only thing that made us all hesitant was that it was going to be one of the hottest days in Sacramento. 106 degrees, hot! I’m all for Summer, but on those days I’m not trying to kick it outside very much.

Anywho, we all decided the fair was better than no fair. We woke up and J grabbed coffees and bagels for us. Then we all got ready and headed to the fair to meet A&M. It was already about 11:30AM and it was HOT. I gave up trying to think I’d stay cool, at that point it was just about staying hydrated and mentally minimizing the heat.

If you’ve never been to the fair. Everything costs money. Parking is $10. Entrance into the fair is about $12, I think. My Dad works there so he buys our tickets every year, what a sweet Poppa Bear. Food cost is a whole different beast to try to quantify. When you walk in they always offer to take your pics. We always oblige and take the pics, but we rarely ever buy them. J always protests, but gives in 😉 We took one of the three of us, they took one of just L, and I requested one of L and J together. There are kiosks outside of the gates that you can view and purchase these pics, but you can also buy them online too. If you want you can get your hand stamped and go out and look right away, but most people just look as they leave the fair.

We didn’t really have a game plan, other than to meet up with a family friend and her daughter (she is L’s age and they get along well). We wandered around and made our way into the air conditioned buildings. I feel like that’s their name sake, but they are really the exhibit halls where you can shop mostly at the top and the first floors are the City and County exhibits, mixed with some food stands. The first thing we did was hit the banos, then grabbed the most delicious beverage, Watermelon juice! I’m sure they added sugar, but I don’t care. It was so sweet and so refreshing, it was amazing. 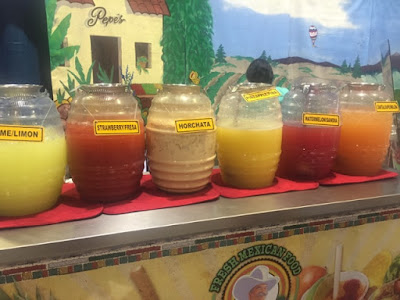 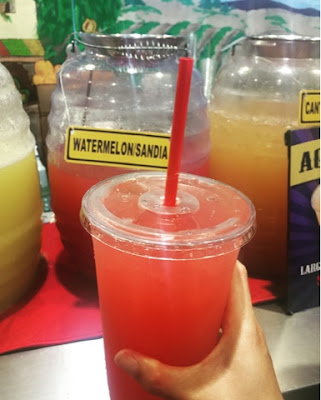 Then we noticed there was a weird looking machine that you could try out, the Endless rope. California Family Fitness has a booth there and you could try this machine for 30 seconds. All you did was keep pulling the rope. L did it first, then I decided to try it cause it looked fun and I wanted a challenge. As if I wasn’t already sweaty, those 30 seconds felt like 3 minutes. It was fun despite the sweat I had going when I was done. We wandered around and looked at overprices useless junk we didn’t buy or need, but stayed cool doing so. I couldn’t pass up these delicious sour rope things that were on steroids. I grabbed a watermelon one to share with the group! 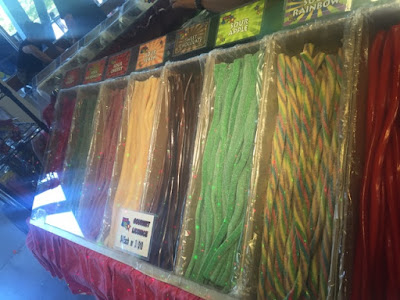 The kids were ready to try some rides. L loves them and is so adventurous, it’s fun to watch her face full of excitement. Our family friends did some rides and then decided to dip out because of the heat. L just wanted to ride rides. So we ended up buying her the Unlimited Rides wristband for a whopping $35. Long story short, the employee charged me $40 for the bracelet and Butler Amusements made it right after the fair. Their Customer Service was on point regarding my complaint, but more than anything I’m worried how many people that employee did that too.

Anywho, it was hot and we’d been there for a few hours. We were all starting to get hungry, so grabbed something close to us. We wanted to go to the food court area with all the good options, but it is too far from the rides. We wanted L to have all the time to ride all the rides before she went home. We grabbed some food from what I think was called the Cali Grill truck. We grabbed the mini corn dogs for L and we ordered the Pull Pork Fries, all washed down with expensive $4 bottle of waters 😉 The food was actually really good. I didn’t eat the mini corn dogs, cause they aren’t my thing. But the Pulled Pork BBQ sauce and white cheese melted smothered over french fries was pretty amazing, it hit the spot. Napkins, plenty of napkins were also needed for our meal. 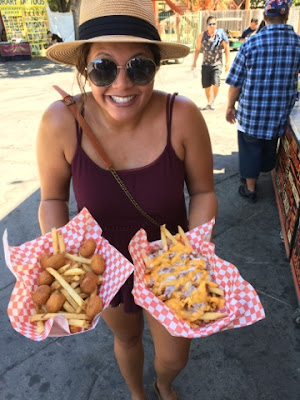 After food, it was back to following L around for another 3 hours while she rode rides. We took a heat break, which obviously included something cold for us to enjoy. Some got snow cones, but I went with the nostalgic Dippin’ Dots. I can’t remember the last time I had these, but they now offer such a wide variety. I got a small order of Mango Pineapple Sorbet. Did you know all DD’s are dairy free? That made my day, I’ll be sure to indulge in them again whenever I see them! 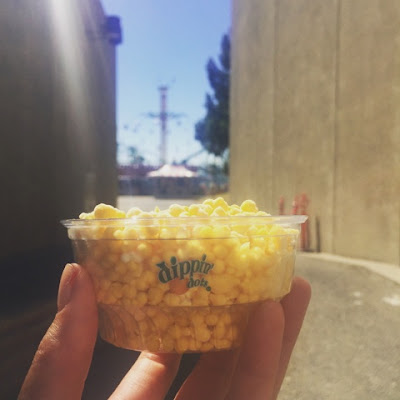 It was time to say bye to L and J’s Mom since they had to go home. We said our goodbyes and loaded them into the car. Time for Adult fun! And by that, I mean we headed straight to the Wine Slushies that I covet so much. I’d been talking about them all day and was excited for A&M to try them. Melanie’s brother added our group, since we had an extra ticket. Sadly, all the machines were empty, except for two. AND those two were slowly making the wine slushy. Luckily, when I got to the front of the line, they had enough for us each to have one, sans Melanie’s bro, he’s not old enough. I was excited for A&M to try them, I’d been talking about them ALL day! 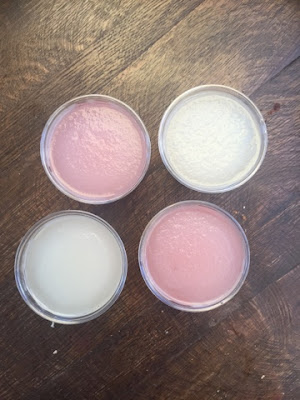 We found a nice little seat in the Wine Garden. After we had a second round of wine slushies we headed to explore more. And by explore, I mean get more food! I was Hell bent on getting myself a Cheese on a Stick from Hot Dog on A Stick, it’s my yearly tradition. As we approached the stand, so did a bunch of emergency personnel. A woman had passed out and they had to help her, it was super sad. It happens when you stay outside at the fair on a 106 degree day 🙁 After she was safely carted away, back to business ordering our food. 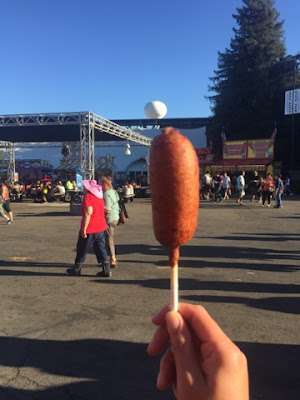 It only took me 7 hours at the fair to get the worst stomach ache. I think I drank the wine slushies way too fast. After I ate my cheese on a stick, I couldn’t even walk to check out the animals. The immediate mixture of cheese and wine did not go so well with my innards! I had to take a break, my stomach was cramping so bad. Thank goodness it wasn’t a ‘run to the bano’ type of situations. But after 15 minutes of people watching with J, the pain went away. The crew met us back where I said I’d be resting. Then we shopped through some of the exhibit halls and meandered for awhile. 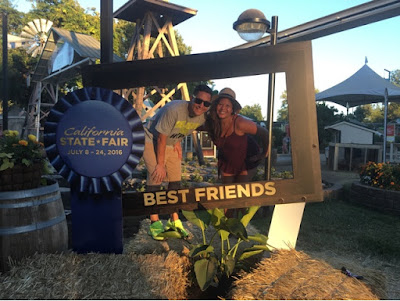 Lots more meandering. Until for the third time we confirmed there would be no fireworks on the last night of the fair 🙁 M and I were beyond disappointed. They only do fireworks on every Friday and Saturday of the fair. In what world do you not do the on the last day, a Sunday for that matter, of the fair? Blasphemy! For a fourth time confirming, I asked on our way out too. Gotta make sure you cover all your bases. 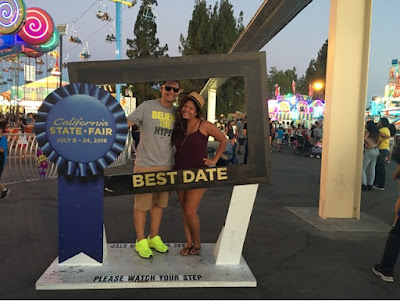 I did make J take our yearly photo booth pic. We chose black and white ones this year. We were a hot mess in them, but they still turned out cute. One of the cheapest souvenirs, but the best! They also had these cute little photo ops every once in awhile and of course I made J take advantage of them with me. After we walked through the midway/games area again we decided we were ‘Faired’ out. 10 hours or so suffices for one day, maybe even one year for some people.  Plus, the crowd seemed to be getting really large and gathering in weird patterns. Lots of cops in uniform and undercover as well. Plus it was a Sunday, some of us has work the next day.

I’m just glad I (we) didn’t go a year without going to the State Fair, the summer wouldn’t have felt complete without going. Luckily next year the tradeshow is earlier and won’t conflict with the fair dates! Another year of bearing the Sacramento heat, paying an arm and a leg for everything, and proudly professing my love for all things CA State Fair!

Fried Food, Friends, and the Fair…the best F’s in California!

Cali Girl Does Hawaii: Back to the Island

Thinking Out Loud – Nothing of Importance