I may be a crappy Giants fan this year…

…but I wouldn’t miss this race! Literally, this was the first time I’ve been to AT&T Park this year. I’m really starting to feel like a faux Giants fan. Yes, I follow the games via my App and watch as many as I can catch (since we don’t have cable), but I haven’t been a physical supporter like normal. It kinda makes me sad. Anywho, that’s besides the point of me running this race.

As every year goes, I make (re: ask and she always says yes) Lil run this race with me. To my surprise, J said he wanted to do the race with us this year, not spectate. I’m pretty sure I signed us all up when the series opened, back in January or February of this year!

This race would officially make me a Triple Bagger. By completing the Sactown 5k and the San Jose 5 Miler, I had already earned the Turn Two award. The only race I was missing for the “Full Sweep” award was the AZ Spring Training race. I actually really loved the Turn Two medal, which I received after the race in SF.

Absolutely nothing changed about this race, with the exception of it seemed even more crowded this year versus past years. You can refresh your memory by reading my recap from last years race. Our bibs were mailed to us for the hefty price tag of about $10/packet this year, which we received about 2.5 weeks before race day. 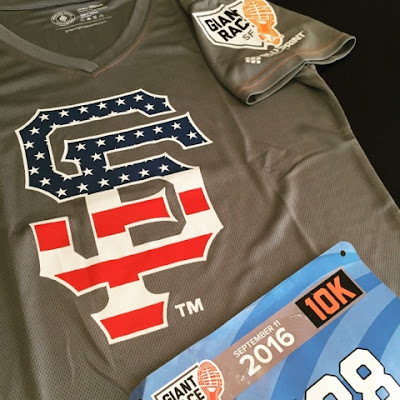 Start time and race course were the same. 7AM to toe the line for an out and back just past Pier 39.

Since it’s an early start time we, again, stayed in Emeryville so we wouldn’t have to get up at 4AM, instead more like 5:45AM. Tired and fully carb’d up, I made sure to snag a pic of my gear. I had to rep Sactown, now that they are a Giant affiliate team! Race day, Lil met us at our hotel and then we all carpooled to the race.

This time around we were a lot more lackadaisical about the run, we literally arrived as the national anthem
was being sang. They started the race before we’d even entered the
corral. We tried to hop in the first section we could, but they were
monitoring the colored wristbands very strictly. So we had to go to the next entrance and we entered just as people were moving along to start the race. I didn’t quite get any good pre-race pics since we were a little tardy to the party! 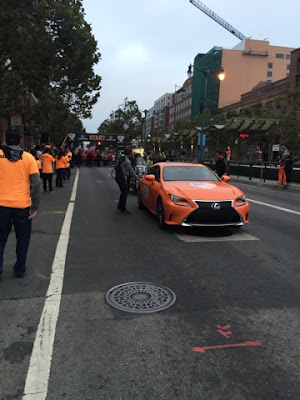 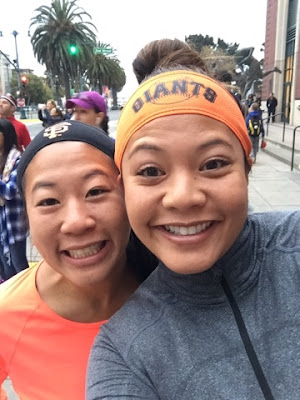 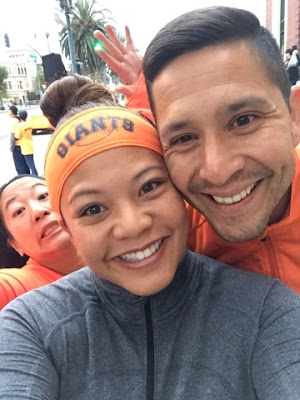 When we approached the start line, I looked up and we were two minutes into the gun start before we started. As I mentioned before, this race was really crowded. Note to humans in races — DO NOT start at the front if you plan to walk any time in the first mile of any race. Just don’t do it! Okay, thanks…rant over! 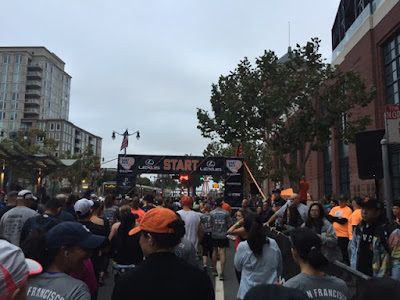 This year the date of the race landed on a very sadly historic day for everyone, 9/11/16. This year marks the 15th Anniversary of that fateful morning that thousands of lives were taken, unexpectedly and by those who sacrificed themselves for others. Everything about the SF Giants race paid tribute to the tragedy that happened fifteen years ago — from the medals to the t-shirts. My absolute favorite part of the race was running past the local Fire Department, where the men stood in a line, at attention, and one man read the names of those who died that day. It was such a sweet and honorable way to remember those who lost their lives, by seeing the men lined up, the fire truck behind them, all the while the bay was their backdrop. It made me happy and really sad, but at peace with such a nice gesture. 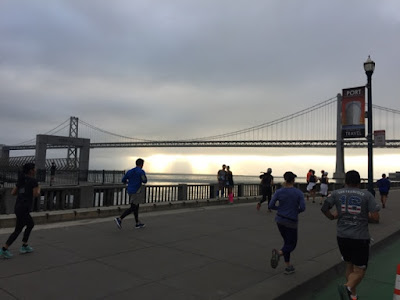 I knew this would be a rough race. For a couple of reasons. One being that J is faster than me and that annoys the crap out of me, but I went into it telling him I wasn’t racing it and that I just wanted to enjoy (as much as I could) the run. I told him, and I honestly mean it, that I didn’t care if he finished before me. I’m okay running slow, by myself. Also, I played a full outdoor game with no subs the Thursday before the race and my Plantar Fasciitis flared up more than it has ever before. I couldn’t even walk on my left heel after the game AND my right ankle had tightened. Both feet/ankles were a mess and from then on I still went to Midtown, but lots of rolling and stretching were essential. Luckily I had a sports massage on Friday night and she worked on all the issues. I’m not sure what is worse, muscle imbalance or an actual injury?

Needless to say, this wasn’t going to be my fastest 10k, by any means. Lil was just fine running at a steady pace (re: not saying slow, but meaning it) with me. J was all over the place, ahead of us, then waiting for us, the entire run. At about the 5 mile mark, my legs were getting tired, but I kept on trucking. It’s always funny to see everyone speed up when they get to AT&T Park, but little do they know they still have about a half a mile left before the finish. As we the turn onto 3rd street, Lil egged on J and they started sprinting to the finish line. I just smiled and watched them jet off and almost smash into another runner 😉 I thought they’d be waiting and hopefully taking my pic at the finish line. However, when I to the part where you enter the stadium they were standing right there. Literally, standing and waiting for me. I was annoyed, by more happy. I would get to finish the race with two of my faves. But, I never want to stop someone from running their race. But if I had to do it to anyone, I’m glad it was with those two!

Lou Seal is right there on the warning track as you finish, such an odd spot for him to stand. I know he’s just giving high fives but I feel like he makes more commotion that necessary by standing there. Also, the warning track is covered by some weird white plastic, that feels weird to run on. I wish we could just run on the warning track, but I get that the field is sacred and they need to preserve it for the players.

As we ran through the finish line, I jokingly grabbed J’s hand and we finished his first Giant Race hand-in-hand, all romantical and shit 😉 Also, we did see that we were right over the 1:01 mark, bummer! 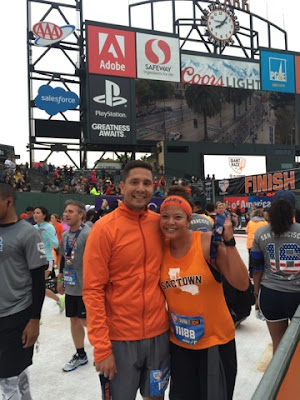 After we grabbed our medals, snagged a quick pic, and a Dasani water, we sauntered about. We had to get our traditional pick in the grass in left field. The set-up was a little bit different this year, or it was just more crowded. Probably the later. We took tons of silly pics and then stretched until we were ready to head out, it was pretty chilly. The food lines were in right field, then you exited up the stairs to grab all your other stuff. The Bobble Heads, tees if you didn’t already get yours, and extra medals were all behind home plate. This is where I snagged by Turn Two medal and my Triple Bagger beanie, which is lame in my humble opinion. Probably the most expensive beanie I own 😉 B-Craw was the BB head this year and it actually has luscious locks, just like his! HAHA! 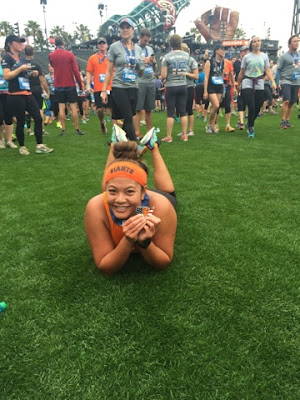 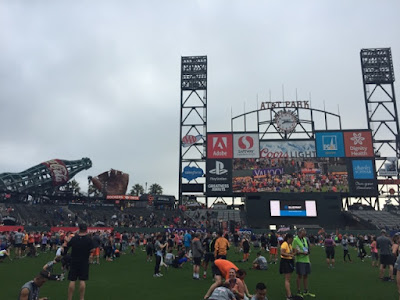 After we grabbed our goodies, we started to walk around the stadium to where I ‘thought’ we could exit. Along the way we found some photo opps, but more importantly nestled right by the Garlic Fries window was a few of the MAC girls. They were volunteering their services to raise awareness for the various charities that are associated for the race. Not many people must have seen them or stopped yet, because they approached us and asked if we wanted to have our make-up done. Well, why not? Each MAC girl did whatever they felt like, Lil’s did her lips and cheeks, mine did my eyes and lips. HAHA, who leaves a race with better than when they started the race?! It was fun and my girl was awesome and super sweet. 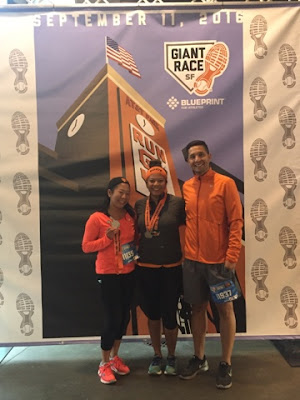 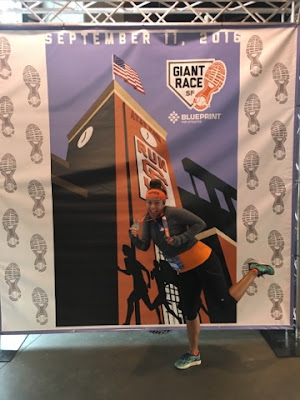 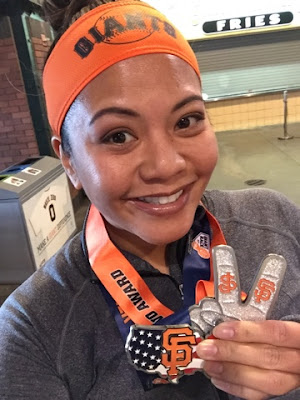 We kept on walking, then got told we couldn’t leave from where we needed too, so we retraced our steps to the Willie Mays exit. Well, after we snagged a few pics at another photo opp location. As we exited, we saw people still finishing the race and cheered them on. As we crossed the street, we saw the Giant Race Lexus parked there, so I snagged a pic of the gaudy thing! 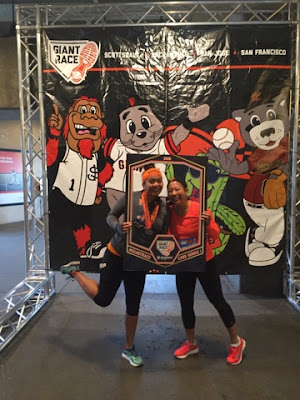 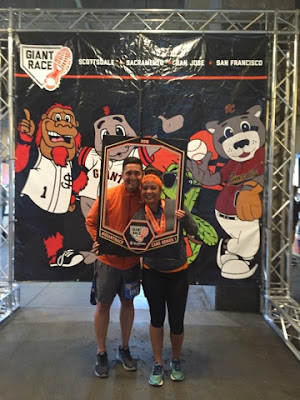 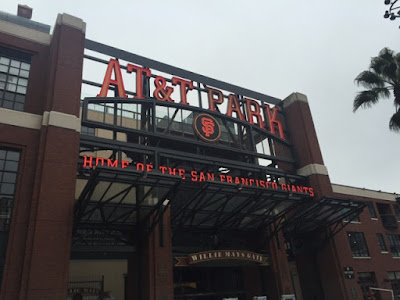 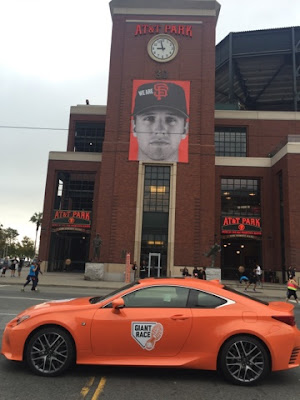 As we walked back to the car, freezing, we decided to go grab breakfast somewhere. Again, like J and I always find out, if it’s highly rated on Yelp, everyone and their Mom will be there. So after the third try we found somewhere, Roxanne’s Cafe. It wasn’t highly rated but it was right near where we parked. It always makes me a little sad when we go somewhere in the City that isn’t amazing, because there are so many options. This spot left something to be desired. Their portions were small compared to their price tag and the food was just okay. My order came out not how I asked for it to be prepared, but J and Lil’s came out to their liking. After, I dragged everyone down the street to Beanstalk Cafe to grab a Soy Mocha for the ride back to the hotel.

Not my best race, nor my best run, but still a great time. I don’t think there could really be anything that wouldn’t make this a great run for me. The atmosphere, supporting my team, and enjoying the City is always a reason to pay for this overpriced run. Not to mention I get to run it with two of my faves and spend time with them, win-win! 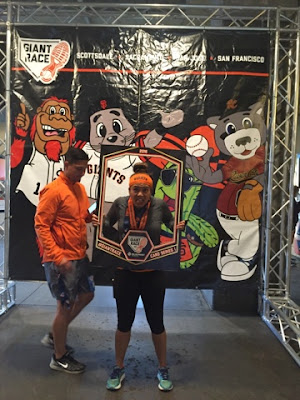 The SF Giants season is about as stable as running these days….