Can you believe it’s been 16 years since we first met Lorelai and Rory? I
can’t, but I’m so freakin’ excited that they will be releasing four new episodes on November 25th. Ever since it was leaked via social media, I’ve been dying to see it. Yes, dying! I’ve always loved GGs (here on out, written as that in my post) and own all of the DVD’s, Netflix just made it easier by having all the episodes uploaded (this year).

I have no idea how I started watching it, but I remember it being on the “weird” channel, the WB. I remember loving it for so many reasons, but I loved the relationship between the Mother and Daughter. I always thought the troubadour was the funniest thing and he still makes me laugh during those episodes. Sookie also made me laugh, her ability to get hurt was just too unreal, but her character was great.

Regardless of why anyone watched it, it was an awesome show. Here we are, sixteen years later celebrating in true Gilmore fashion. Netflix reached out to various local coffee shops around the US and allowed them to turn into mini Luke’s Diner Pop-ups to celebrate the Gilmore-versary!

I happened to hear about it on Saturday, when I stopped by for my weekly, post Midtown workout NOLA iced coffee with soy at The Trade Collab. I do this almost every Saturday, right after my workout. It’s a lovely treat, the owners are so sweet, and the drink is ahhhh-mazing! Somehow we got on the topic of GG, not even sure how, but she mentioned that she’d be turning the shop into Luke’s diner sometime the following week, she just wasn’t sure the day.

So, of course I stalked social media for the announcement. Luckily, I also receive their emails, so I was in the loop right away. I know Summer Sister is a huge GG fan, but I didn’t know how many more of my friends had the same, odd love for his mother-daughter duo as I do. One friend, who I haven’t seen in a year, was just as excited as I was. So excited, we text plans to meet ridiculously early to get our Luke’s coffee.

After a great workout at Midtown, even stretching and rolling occurred, I ran over to the Trade to meet Amanda. Before I left, she text me there was already a line formed. When I got there, I met her in line…which was super long. There we stood, freezing and chatting for probably a little over an hour. Literally freezing, but too excited to let it deter us from our end goal! The cup. 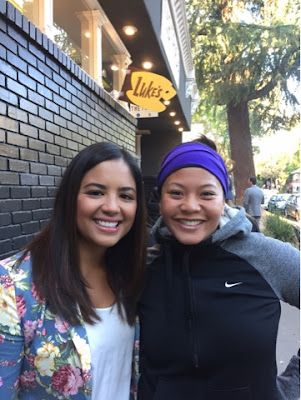 Best part about this AM is that Amanda doesn’t even drink coffee. She just loves GGs that much! People were dressed as characters and some even had the cutest GG shirts. One girl’s shirt read “I drink coffee like a Gilmore Girl”! I was completely smitten with it and even asked where she bought it, but sadly she said a friend made it for her, so I guess I’m out of luck. To Pinterest I go.

The Trade was minimally decorated, but it was still cute. They had a Luke’s sign outside and their windows had Luke’s logos on them too. There were a couple of signs inside, some mentioning Stars Hollow, also a list of “Luke’s Rules,” but more catered to current days (re: NO Man Buns)! Of course, the owners and staff had Luke’s hats and aprons on, all while sporting plaid shirts. Originally they were only supposed to have 250 cups, but they had enough for 500 people. 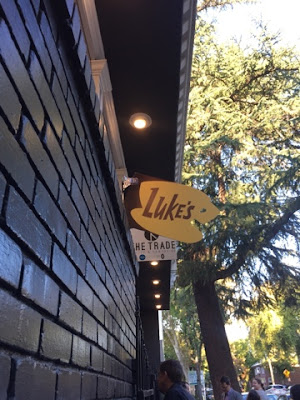 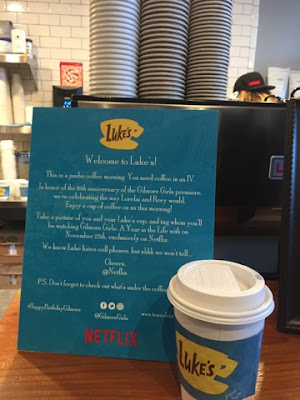 The coveted cup is a white coffee cup with a GG quote about coffee and a SC code (?) to unlock a special filter. Except, both Amanda and I, had no clue how to “unlock” said filter. So, here I am hours later, learning how to unlock it, without being able to upload a pic from earlier. And the filter only lasts for one hour, boo! SC is really dumb! 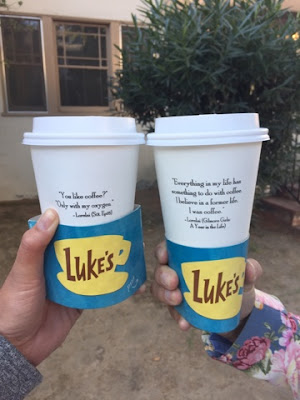 I loved everything about Netflix’s little marketing stunt for the upcoming GG release. It was genius. Pretending to be in Stars Hollow and getting free coffee, I didn’t need that to watch their episodes. But I do appreciate it! As if I wasn’t already super excited…this just amplified it by a million! 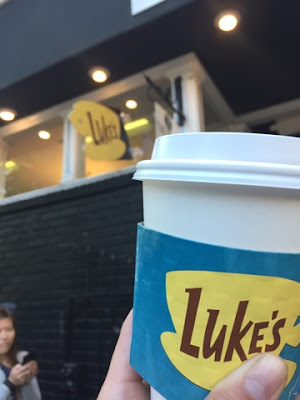 I
am ridiculously excited for F-O-U-R episodes. Of course I wish it was
more, but I’m just grateful they made ANY (more) for us to watch. I’m so
excited (re: caffeinated) that I’ve decided to plan a “viewing party”
for the big event, in GG fashion! Coffee (or wine), PJs, lots of junk
food, and then more junk food! I can’t wait!
In Omnia Paratus…AND November 25th!

Thinking Out Loud in Pictures

5 Things Friday – I Love You Grandma!