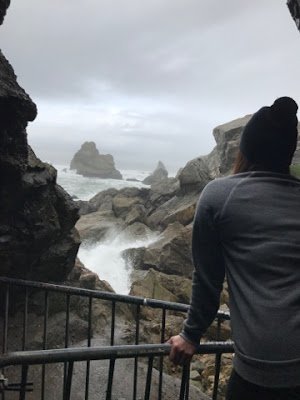 …or just need a reset. I had that feeling and I expressed it to J, so he planned a quick little day trip to the City for us. I didn’t realize, but he had planned for us to hike, but the weather had a different idea. He gave me two places to chose from, but I wasn’t feeling decisive so I told him to pick.

We got up, got lazy, and took a little longer than we had planned (to leave). All good, though. We swung by Sbux so I could grab a coffee, on our way out of Sac. Essential. I didn’t chose Sbux, but J did. He always does, he doesn’t crave the local stuff, like I do.

A fairly easy, non-trafficy drive to the City. He’d asked me to decided between Point Reyes and Land’s End. I didn’t care either way, but either would be fun to go to together, new and different. Point Reyes did have Cowgirl Creamery going for it, but we decided to go to Land’s End. We chose that, because it gave us more options to grab food before we went gallivanting.

I thought all City hot spots were “in” the City, not on the outskirts. Wrong! Beachside Coffee Bar and Kitchen was just as crackin’ as any spot ‘in’ the City would have been. Seating was minimal and there was a line to order. Luckily our timing was on point and I snagged two seats at the small bar area and then I waited in line while J watched his beloved Spurs finish their second half.

The menu had so many options. J went with the Pulled Pork Benedict and in a last minute rash decision I went with the Chicken and Waffles, 2 pieces. I wanted a mocha, but they don’t do soy milk here, only almond milk. I went with a Guatemalan pour over and a choco chip cookie the size of my face. The food was on point, except one of my pieces of chicken was not cooked all the way. It wasn’t much, but it was kinda chewy and gross. The flavor of everything was really good. Even J’s, when I don’t really enjoy hollandaise sauce often. The pour over was soo good, I wanted another one, but we needed to give up our seats — it was getting really busy in there. 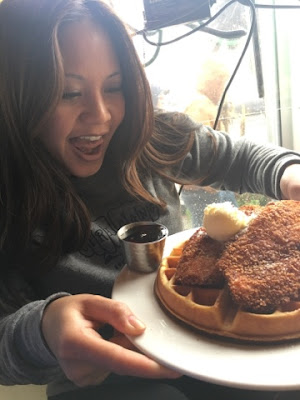 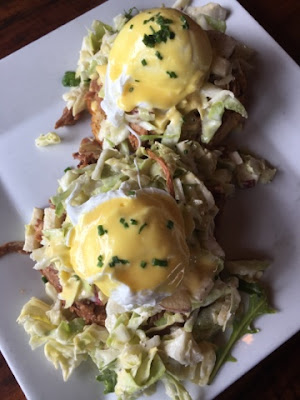 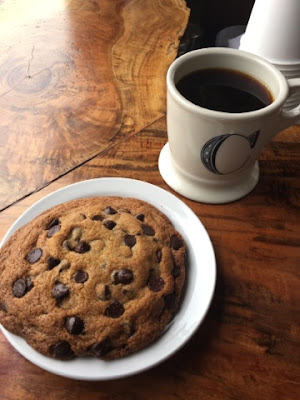 I’ve always wanted to check out the Sutro Baths, I’ve even told J that a couple of times. I didn’t realize the Land’s End trail was also where the SB’s resided. Lucky for me, we figured it out. Our brunch spot was chosen because of it’s proximity to Land’s End. We were winging it for sure. As we approached our final destination, we drove past the Cliff House and the Lookout, which is where we finally parked. Happily I noticed that the SB’s were right there too!

It was light weight sprinkling and the weather was dreary, but whenever I’m near the ocean my heart is happy. And J knows that. 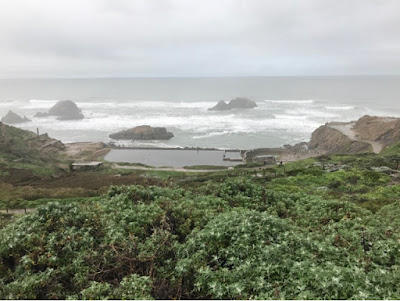 We didn’t take any of the trails to hike Land’s End, but we did wander around the Sutro Bath’s, climbing on things that probably weren’t meant to be climbed upon. J always wants to wander where we aren’t supposed too, good think I’m a trooper 😉 Walked through a cave that ended with a blockade, but a great view. We happily enjoyed being drizzled on and taking way too many pictures for J’s liking. 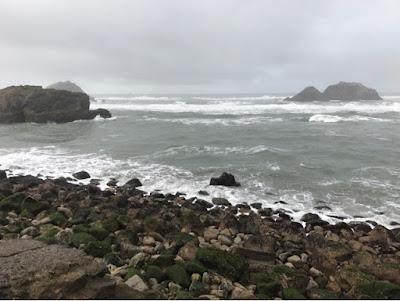 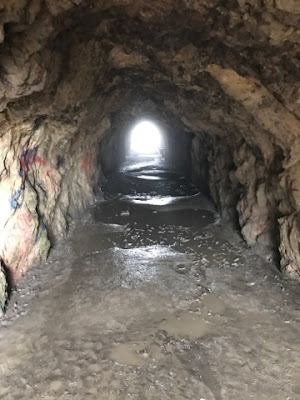 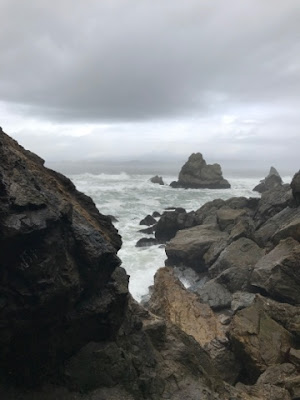 After just enjoying the scenery and wandering with no plan, we made our way back up-hill and then up 135 stairs 🙁 My knee and cardio were angry at me! Then we decided to nap in our car, cue old people jokes. We’d woken up early, even though we didn’t leave until hours later. So we just chilled in the car for a bit. As we were getting ready to head out, the sun broke through. I almost made J stay for a bit longer, but we decided to go explore a little more.

As I was looking at Instagram, I saw a SF local/friend commented/suggested a place where we were near, to try some special (re: Hipster) drink. So, we headed to Andytown Coffee Roasters, no biggie that this was my third coffee for the day! The Snowy Plover. Espresso + S.Pellegrino Sparkling Water + Homemade Whip Cream = delightful. I was a little worried I wouldn’t like it, since I don’t like sparkling water. I tried to order a soy mocha as a back-up, but as you’d have it they didn’t have soy. Almond milk only, again! It was for sure a cute little caffeine slangin’ spot, but super small. So when they burned a batch of cookies, the whole joint wreaked. 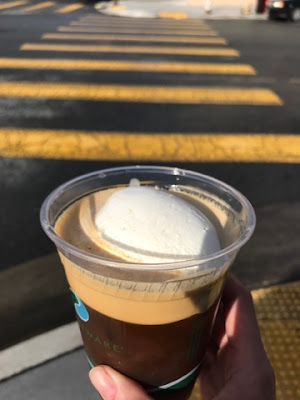 I would be lying if I didn’t say I was completely surprised at how tasty the Snowy Plover was. I was outside showing J the drink, and tried it. I think I said “Wow, its not that bad” multiple times. And then a few times in the car again! HAHA! Glad I made us stop for a second to try this goodness.

Next we found our way to Golden Gate Park for some exploring. We had intended to go visit the Japanese Tea Garden, but said ‘no’ when we realized it cost $8. Our cheap side was showing, so we wandered around some. We didn’t feel right going to the CA Academy of Sciences without L, so we didn’t go in there — and it was like $35 too 😉 In this area of GGP there was also the De Young Museum, but we didn’t really feel like going there either. So, right in the middle of all three of these places are some water fountains, park benches, plenty of people, and trees not in bloom. We parked our butts on a bench and just people watched and chatted for awhile. The sun was peaking out and the weather was really nice, no sign of rain anywhere. 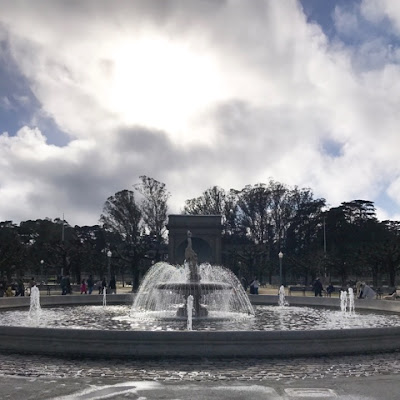 We figured we better get home to our sweet L, so we walked back to our awesome parking spot and headed home for the day. A (partial) day well spent in the City, exploring new sights and tasting new goodness. Something about day trips always seem to rejuvenate my soul from the stagnation of the day-to-day ho-hum. Although that is also where I find joy in our home and our family, sometimes I need to reset. 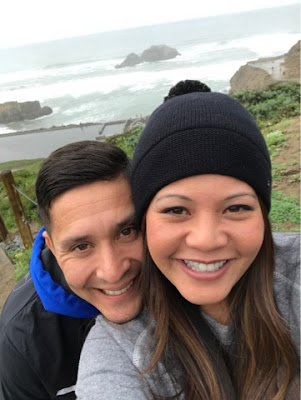 I appreciate that J knows this is part of my love language, even if it doesn’t fit snuggle into one of the five categories in the book.

The ocean calms the chaotic, while stirring creativity out of the boring…

Thinking Out Loud – Right to Write