I’m not above trying most things when I’m sick…

I finally bit the bullet and bought Zinc! After multiple times of being sick and researching if I should take it or not, I caved. To no avail, this time around I decided to try anything and everything under the sun. I’m going on day seven of a Sinus Infection that seems to want to hang around!

My co-worker mentioned a new place in town that she thought offered salt baths. She heard they were good for being sick and respiratory issues. I actually thought she was referring to the new Asha Urban Baths, but she looked it up and shared the name —Heavenly Salt Spa.


Of course I sent straight to the Intranets and looked up what this place was all about. I saw that they offered halotherapy – better known as ‘alt therapy” (halo is Greek for salt). Halotherapy is a natural and holistic alternative that can coincide with traditional medical treatment. The experience is meant to mimic the ancient salt caves of Eastern Europe, which have long been considered therapeutic. Can be very beneficial to those who suffer from the following conditions: Allergies, Asthma, Acne, Immune System Deficiencies, Bronchitis, Sore Throat, Cystic Fibrosis, Eczema, Emphysema, Nasal Congestion, Psoriasis, Sinus Infections, and Snoring. All taken from their pamphlet & website.


It didn’t seem too off the wall to try. The price was $49 for a regular session and Yelp offered 25% off. Then the baller-on-a-budget in me decided to see if there were any deals on-line. Of course, I found one, but it wasn’t on Groupon like I assumed it would be. It actually came from the Sacramento News & Review Sweet Deals website offering $50 gift certificate for $25 for Heavenly Salt Spa. If you are all interested, I’d suggest you buy this deal. Only caveat is that after you buy the SD you have to either have it mailed to you or you pick it up for free at the SN&R office. So not tech savvy for them being the SN&R. Luckily, I’m kinda bossy, so I called up the SN&R office and told them there had to be a code or something that I could just give to the spa, which they did have. Luckily, Tammy at the spa was working with me and I gave her the code and all was taken care of.

I was speaking in tandem with SNR and the spa to make my appointment and situate my SD. I made the appointment for Friday after work, which was good because Friday I felt like I was getting worse instead of getting better, I even left work a little early and just rested until my appointment. Nothing was easing the sinus pressure and headache, nothing! I also asked if I should do the sauna option, but Tammy suggested I not if I was still feeling under the weather. She thought it may be too much on my body, if I was trying to get it back to regular state. I appreciated her knowledge about it all, she seemed like she cared about my experience before I even arrived.

It was super close to my house and parking was annoying, but luckily I found something and it was close enough to the 6PM timer mark to park there for free and no ticket. As soon as I walked in, Tammy greeted me and knew exactly who I was, as she sat a small desk. I tried to offer her my receipt and code and she said I was all good. She took me straight back to the lockers to place my valuables. They ask you not to bring in your phone, just in case the salty air messes it up. As I was taking off my layers, she was even kind enough to help me into the hospital grade booties that you wear. I thought these were super weird, until I realized why you wear them. I also drank some water, just in case it was dehydrating in the room (which it wasn’t). You take your locker key with you too. 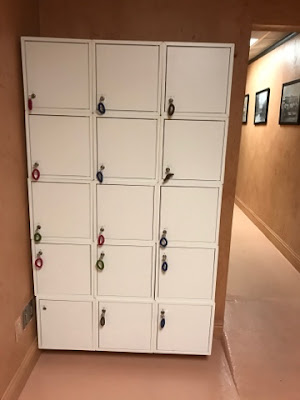 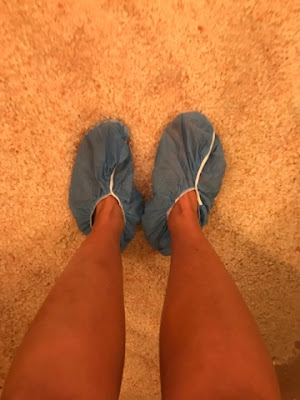 Tammy had told me to wear the minimum, because Halotherapy is good for your skin. I was excited about that added benefit, due to my facial skin issues lately :/ So, I wore short running shorts and a lulu tank to get the most out of my 45mins. As soon as I was ready, Tammy walked me back to room #5 (yay, my fave number).

As she opened the door, I saw six IKEA chairs in the room, three per side. The entire floor, except for where the door opens, was covered in Himalayan Salt. Yes, like huge chunks of rock salt all over the ground, thus the medical grade booties for your feet! Tammy showed me how to use the lighting system, which I could control myself. No one else was sharing the room with me, so I had full control. Someone had left a box of tissues (or they are always in there) in the room, which I grabbed. I could have sat right under the vent, but I chose to sit in the middle — just in case it was too much for my respiratory or anything really. I sat in the middle and Tammy handed me a blanket if I got cold, but she folded it and suggested I use it for my lumbar to start. She really was the sweetest ever. She said goodbye and enjoy, then quietly shut the door. 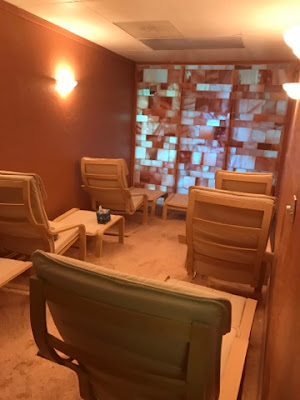 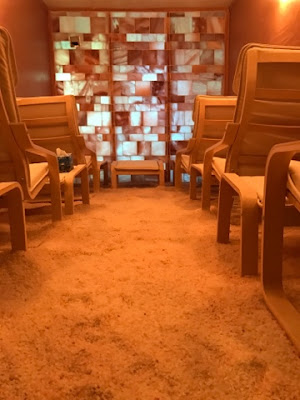 At this point, I was still really congested with lots of sinus pressure. I couldn’t really fall asleep, even though I wanted too. I chose to read my book instead. I could hear Tammy tinkering around behind the pretty wall and then the vent started pushing out the salty air. It wasn’t overwhelming or anything. It wasn’t too noisy of a vent either. The room is room temperature so I wasn’t cold or hot the entire time. But the blanket was there for backup if I started to get cold…but we know that would never happen with me 😉

I did have the weirdest sensation on the tip of my tongue. I have no idea why, but it was super tingly. I’m guessing it was in reaction to the salt I was breathing in? I meant to ask Tammy about it when I got out, but I completely forgot. I was reading for awhile and when I looked up, the room was slightly hazy. I really enjoyed unplugging from my phone and just relaxing. Reading or napping, it was a lovely 45 minutes of bliss. Sadly, the walls are pretty thin and I could hear everything going on outside — when another customer left their session, the click clack of Tammy’s high heels, and pretty much anything outside of the room. It wasn’t annoying by any means, but just know you can hear a lot. 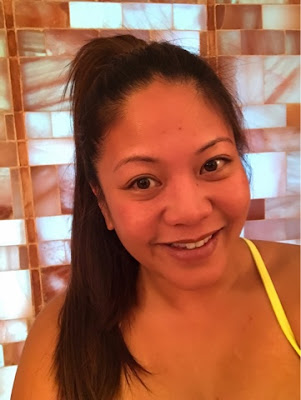 After 45 minutes, Tammy knocked and let me know my time was up. She opened the door and kindly asked how I liked it? After that she let me go at my own pace. I headed to the lockers and put my winter wardrobe back on. I asked her if I could take a few pics of the place (for the blog, duh) and she said yes, she takes them all the time. As I was walking back to room #5, I realized there was an additional hallway I didn’t notice before. Which means there is much more space here than it lets on from the front.

I drank some water, snapped a few pics, and quickly chatted with Tammy before I left. I also peeked my head into the kids Halotherapy room, which was super cute. They had cute kids chairs and a few toys scattered for the kids to play with. Not sure how L would respond to this, but I wouldn’t be opposed to taking a kid here. Obviously, with the right preparation kids would have no issue here. 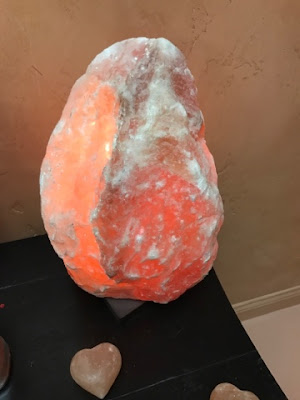 I’m still a little hazy on how exactly my body responded to this treatment. This treatment, coupled with additional Zinc pills, antibiotics, and Ibuprofen have been used to try to combat my Sinus Infection. I did notice that my face irritations have gone down significantly and each day after the Halotherapy I’ve felt better. The mucus also seemed to dry up and mostly I was left with a dry cough. Again, I don’t know if it was the Halotherapy and/or the antibiotics.

Overall, I would do this again at the $25 price point. It was relaxing and calming. Tammy suggested I mediate, but I enjoyed reading and dozing off for a few minutes instead. I’m not sure if I would have felt as relaxed if I had to share the room with strangers. I think it would be fun to go with girlfriends, but I think it would detract from the tranquility that I enjoyed. I loved disconnecting and just relaxing. Besides the weird, tingling tongue it was just like sitting in a quiet and tranquil, super cute little room. I may be more of a skeptic than the optimist when it comes to this type of stuff, but I’m glad I tried this out — even if it turns out to be a hoax 😉

Gettin’ salty for my sanity!

Ganeeban DOES NOT Run Shamrock'n