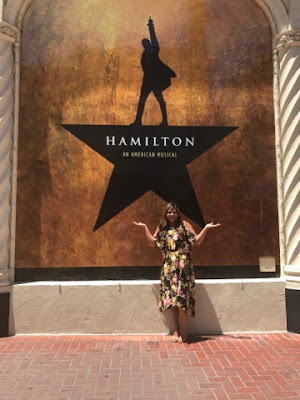 …just like my Country. But still not comfortable recording myself and posting it. Okay, let me step back here a second and say I can easily turn the camera around for a selfie. I can easily get animated for a Boomerang. BUT what I’m talking about is recording myself. My voice. My weird facial expressions. My everything. That scares me. I’m in awe of those who can record themselves so naturally, because it DOES NOT come naturally to me. At. All.
I don’t have much experience or dedication to the vlogging world, but I do know it exists. A friend was recently showing me a couple famous vloggers. I for the life of me, couldn’t understand how people spend so much time following, re: watching, these random humans share the randomness of their lives. I also have another friend, who I’ve mentioned on here, that actually vlogs all the time. She went to some huge conference on vlogging too! There’s a market, I’m just not about it. I do realize vlogging and IG stories are NOT the same, but close enough for what my general point is here.

So there’s that, but also recently I was having a convo with a gal pal, Jamee, and we mutually agreed we are NOT comfortable speaking into the camera about whatever makes us happy or pleases us. We just don’t. We both admire those who do and watch them on IG. We also discussed if we were missing the mark for our blogs, by not engaging people with this style.

In the end, if I do not feel comfortable doing it. I won’t. Plain and simple. If I don’t feel authentic, then I’m 100% sure that would be recognized.

Wellllll….I had a random opportunity to try it out the other day. Well, it randomly popped into my head while I was driving to my friends house to head for a day trip to the City to see Hamilton. I thought I should try to do a whole day of IG stories and record myself. Yes, I shuddered at the thought. But then with a little encouragement from Kristen and Tina, I decided I’d do it.

I now understand why people do it in their car. It’s quite and if you do get judgmental stares you can pretend you don’t see them. Mostly, it’s quite and you are by yourself — unless you have two friends in the front encouraging and teasing you, all in the same. I found it pretty easy to record myself for two videos on the way to the City, but pretty much after that I found it really, really hard to record myself without fear of judgment.

Watching the girl on the street corner whip out her phone and hold it to the sky like she was signaling Batman was too much for me. She easily stood there among chaos and just started recording the sky or buildings, or whatever she fancied. I couldn’t get my phone out in time to record the Target I saw, by the time I did and figured out how to get to my IG story the light was telling us to cross and the momentum of the people was strong. The moment passed. It fell opportune because I love Target and I generally don’t think of them in large, metropolitan cities, so it fit ‘me’. But I wasn’t quick enough.

Then as we were walking to the Bluestem Brasserie I remembered I needed to tell where exactly the day trip adventure was happening, since I made it a surprise. I not-so-comfortably recorded myself walking down an alley in a business park and spoke to the camera. As I did it, I guess I cared less and less if anyone saw, but there weren’t that many people there. I also am opposed to re-takes, so I kinda just post it, regardless of the accuracy of the video or content 😉 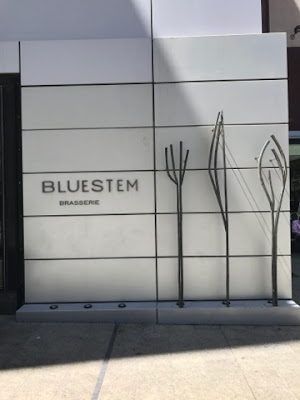 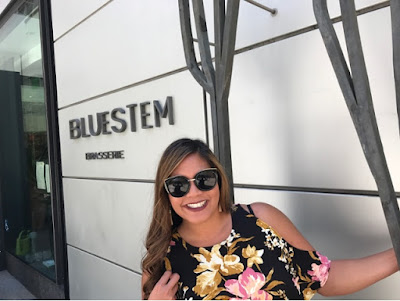 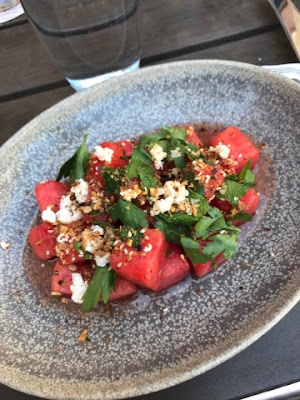 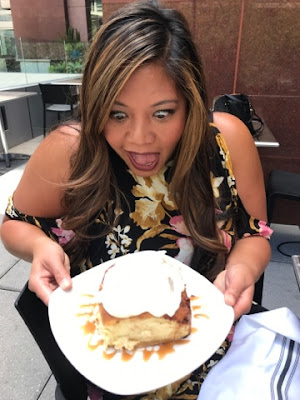 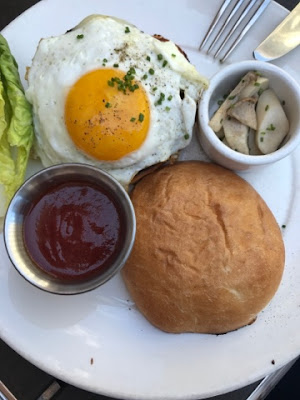 I don’t think its fun or polite to interrupt a meal to record myself talking to the camera, BUT I am okay making people wait to eat to snap pics. So, I just recorded everyone’s food during our meal, but didn’t ask anyone to stop eating. Which is why Tina’s plate looked as if she devoured her meal, even though she just split the burger for her and I. I honestly kept forgetting to record myself. I had more fun engaging with friends than recording a monologue.

I had the prime opportunity to record our walk to the Orpheum, but I didn’t. It was a semi-short, sweaty walk there. I busted out my flip flops and put my heels in T’s bag (she offered, thankfully), in a Ziploc of course! When we got there, I quickly changed so we could get some cute pics with the outdoor signage. I did take the time to make a quick video of the cute signs outside. 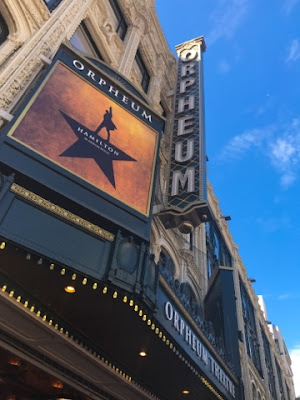 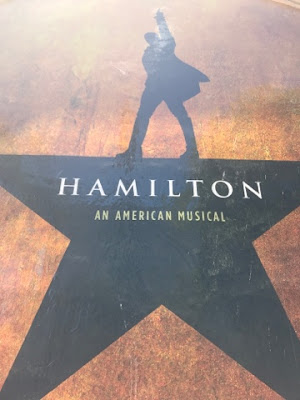 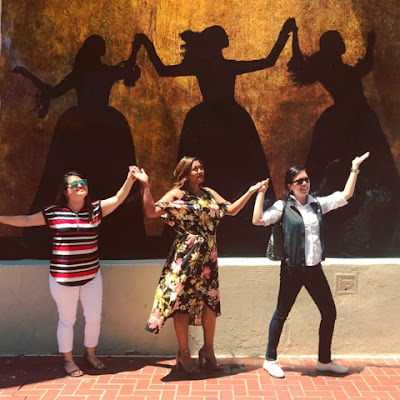 I find it easier to record everything BUT myself talking into the camera 🙂 I decided to record myself walking and I didn’t realize I was being that person by showing the cost of the ticket. I was embarrassed when I realized it had the cost on it, but I should have known, I think they always do. I think it’s tacky to show off how much was paid for things and I felt bad for doing it. But I didn’t delete the video, because I was trying to stick with trying the whole vlogging thing.

As we found our seats I did a couple more small snippets. I was content with one of just the stage and the playbill. But I figured I better turn that camera around and do more face time, so I did a quick one saying hi and that I was excited and then panned to all the friends I was with. 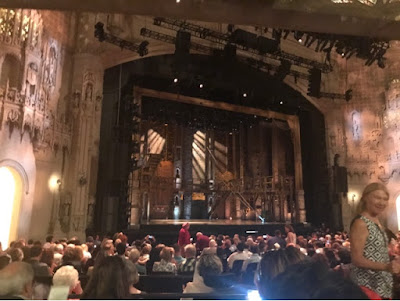 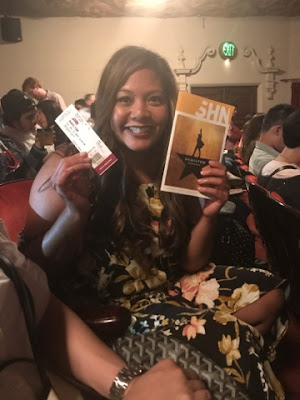 The show was good. Almost really good, but I think if you let the hype get to you, you may be slightly deflated like I was. I’m embarrassed to tell you how much of a history lesson that was for me. I really enjoyed the rapping, like hella loved it. The rap battles were my favorite, along with a few of the little digs at our current political environment/atmosphere. Some moments were slow, but every production has those, I guess. I enjoyed it, but it makes me sad how expensive the cost is and how the hype has driven the cost up so that the average person cannot afford this. I am an average person and I could barely afford it, luckily Kristen was on top of ticket sales and secured them when they were released and I also paid her back in installments. No shame in my game, #BallerOnABudget and thankful she was cool about the repayment plan!

As we made our way back to the car, I didn’t record anything. The area is mostly homeless people and awful smells. When we got closer to the shopping area we popped into two stores to take a quick glance. Then we headed to our next destination, ice cream.This had been the plan all along, but we switched locations from Salt and Straw to Humphry Slocombe.

Kristen wanted to go where none of us tried yet. Although Tina and I had HS before, it was never at their actual location, so we were all excited to go. Again, I didn’t turn the camera around, but I did a little recording of the outside menu board and me walking into the ice cream shop. It was pretty dead, since it was essentially dinner time. We tasted a bunch of flavors. The real mini spoons still creep me out, I prefer plastic – yes, I realize it’s not green of me. I finally settled on their Blue Bottle Vietnamese Coffee ice cream in a cone! It was soo good. Come to find out, they sell HS in Whole Foods in Sac! Thanks for the Pro Tip, Tina! I had only tried it Domain Carneros and loved it, it was any different here at this location. 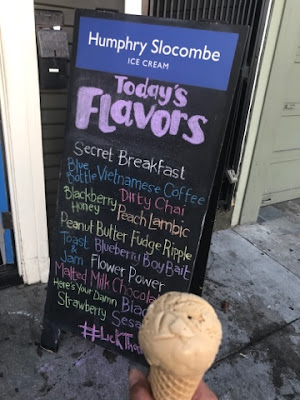 From here on out, I essentially stopped using IG and it’s stories for the day. I did have a great opportunity to use do one more story as we tried to find me some pretty sunflowers to take pics with, but didn’t. I literally forgot about it! We drove around looking for them in Woodland/Dixon area and found really, really sad ones. We had given up, then right before we approached Davis they were there on our right but we missed the exit. So, if you are looking to take one of those awesome sunflower pics (which everyone is doing), they are near the UCD exit as you go East on 80! Pro time for ya!

From there we headed home, I napped, they chatted. I needed to get home to catch the end of a birthday party and they were hungry so they went to grab a bite to eat. In all, it was an amazing day of good people and good times. The weather was perfect and we were all happy we saw the most talked about play. I’m better for having watched it, even if I felt slightly deflated.

I realized, it isn’t SO awful to turn the camera on yourself and record your life. Will I do it more often, probably not. Have I been IG storying stuff? Yes, I fell to the dark side. It honestly wasn’t as bad as I thought recording myself would be. However, I am still very embarrassed about having strangers watch me or give me weird looks while I do it. So maybe if I’m in the car with quality content, I’ll do it. But other than that, you can expect forward facing recordings, probably most of food and whatnot. I’m glad I tried it and made myself get out of my comfort zone. Silly, because it’s nothing of importance. But I think any time we get out of our comfort zone, we grow as a person. Yes, even if the medium is social media. I totally appreciate those that talk into their phones on the daily. I watch and applaud them, that takes confidence and self-assurance — from my perspective.

As if you don’t get enough of me already, I’ll keep my videos to a minimum….